"Voyage to the Heart of the Amazon"

Voyage to the Heart of the Amazon is different from all other cruises offered in the Amazon, it is an “expedition cruise”. Small groups explore far into the forest where you are able to see creatures that are hidden to other visitors.

You explore some of the most untouched rainforest in all of the Amazon. The expedition cruise is the only vessel that explores far into the world’s largest Amazon reserve: The Central Amazon Ecological Corridor. Within this reserve are tens of thousands of square miles of uninhabited wilderness with the creatures that have made the Amazon the object of myth and legend.

The expedition cruise begins in Manaus, Brazil and over seven full days the Motor Yacht Tucano navigates far upstream on the Rio Negro. In the daytime and often at night you seek out the wildlife that still lives in the world’s greatest of wilderness.

The Amazon voyage on the M/Y Tucano is active. Together with naturalist guides you get out into the forest and explore -- you are not confined to the vessel. There are daily walks in the forest and you explore by launch the small streams that wind their way through into the uninhabited interior. On excursions into the forest you observe magnificent plants of every imaginable shape and size.

You listen to the exotic calls of birds and mammals and watch them from a forest trail or while scouting the river’s edge. In the evenings you have a brief discussion about the creatures that you observed during the day. Some nights you explore the river’s edge by launch and with spotlights spot caiman, close relatives of crocodiles.

The basic navigation plan is to voyage upstream northwest on the Rio Negro as far as a major river called the Rio Jauerperi, about 200 miles from Manaus, Brazil. Along the way you explore many small tributaries where the forest is wild and undisturbed. The journey takes you to many different rainforest habitats which allows you to see a great diversity of wildlife.

On the last day of the voyage you travel to the “Encontra das Aguas”, the meeting of the waters of the world’s two largest rivers: The Amazon River and the Rio Negro. The light colored water of the Amazon and the dark water of the Negro do not readily mix and the two rivers flow side by side for many miles. You explore the beautiful and fabulously rich environment where these rivers meet and visit the Lago Janauari Ecological Park which lies in a wedge-shaped delta that divides these two storied rivers.

The Amazon covers an area near in size to the continental United States and it is still almost entirely covered with primitive tropical forest. Within this vast watershed, the Rio Negro drains over 300,000 square miles, fully ten percent of the entire Amazon basin. There are only a few small settlements large enough to be considered towns. It remains a true wilderness. Beyond the tangle of vines and limbs along the river banks are hundreds of thousands of square miles of primitive forest. Voyage to the Heart of the Amazon explores this remarkable region.

An important feature of the program are visits to the homes of deep forest settlers. You can talk with them about what their lives are like living on the edge of this vast trackless forest. A walk through their gardens is always interesting and you marvel at their pioneer skills and self sufficiency. All deep forest settlers gather plants for medicines and you talk with them about which plants they collect and their uses.

On the voyage you explore several kinds of rainforest including the strange and beautiful flooded forest known by Amazon Indians as the Igapó. In the igapó, the dark water seasonally floods into the trees, sometimes for miles. Orchids and bromeliads cling to the limbs of overhanging trees, which are home also to many fishing birds and iguanas.

You will also explore the other two kinds of rainforest of the Amazon: the tall Terre Firme forest and the fantastically rich Varzea forest. You will see amazingly colorful birds, magnificent rainforest trees draped with vines and carpeted with orchids, and occasional monkeys chattering and cavorting in the tree branches.

Since you are exploring, the daily schedule varies, but days have a basic outline of activities. You get up with the sun every morning and either search by launch for birds and wakening howler monkeys or walk in the forest. Mid-morning you return for a full Brazilian breakfast. After some relaxation you go for another excursion. At around noon the vessel gets underway and travels until the late afternoon which is when most animals come out again to feed. During the middle of the day many guests choose to observe the forest and the spectacular vistas from the observation deck, while others take a nap before the afternoon activities.

About two hours before sunset you embark on an excursion to some other place of interest. In the evenings you have an informal talk about what you may expect to see the following day. Some evenings, from the comfort of the launches, you spot wildlife with powerful searchlights. You see and do a great deal in the forest, but there is also plenty of time to relax and have fun during the trip. You can swim in some of the cleanest water in the world. The Rio Negro is almost identical to rainwater.

You also spend some time fishing to see what glides in the depths. Almost everyone can catch a piranha! Every afternoon you have hors-d’oeuvres on the observation deck and are treated to a magnificent sunset. At night guests often go to the top deck to marvel at the constellations of the Southern Hemisphere and the millions of stars visible in the dark sky of the Amazon.

Arrival at the Manaus - Eduardo Gomes International Airport. You will be met in the arrivals hall and transferred by private car to your hotel.

*For morning arrivals we can arrange a half-day Manaus city tour.

This morning you transfer to the dock and board the Motor Yacht Tucano and depart upstream on the Rio Negro. Through the morning you will cruise through the world’s largest river island system, the Anavilhanas Archipelago. From the observation deck you scan the magnificent tangle of vegetation at the water’s edge. By mid-afternoon the vessel has gone beyond the frontier of settlement and entered a wilderness area.

Both shores are covered by dense rainforest. Though you cannot predict what you will see, you have a good chance of observing pink river dolphins and a large collection of exotic birds. Most certainly you will be treated to magnificent forest vistas and the spectacular trees themselves. In the late afternoon you embark in the launches and hunt for wildlife. You may also go for a swim in some of the world’s most clean and refreshing water.

Early this morning you explore the rainforest along the waters edge in our launches or kayaks, each group with a naturalist guide. You should hear and perhaps see howler monkeys and you should hear a morning serenade of toucans. After breakfast you go for a walk in the forest where you will get a good start on understanding Amazon ecology. Around midday you return for lunch and the vessel will get underway, perhaps stopping at a place to swim. In the late afternoon you will again explore the forest in our launches and listen to the sunset chorus of birds and frogs.

This morning there will be an early exploration of the waking forest. You will keep our eyes open for monkeys... on most trips you see them often. You return for breakfast followed by either a walk in the forest or an excursion in the launches. M/Y Tucano will travel during the middle of the day and you stop in the afternoon for an excursion. Tonight the vessel may travel a bit more as you marvel at the night sky crowded with stars.

After the two morning excursions Tucano will navigate along the heavily forested shore, scouting for wildlife. You may stop for a visit at a settler’s home carved out of the forest. In the early afternoon you will be near an extraordinary river called the Rio Jaueperi. Here you will see a kind of forest known as the varzea. You will scout along the shoreline for some of the extraordinary creatures found only in this unique environment. Weather permitting you will do a night excursion to observe nocturnal creatures.

Today you will voyage to the west side of the Rio Negro and continue to scout in our launches and walk in the forest. You will explore according to the weather and water depth areas rarely visited by anyone else.

Tonight the M/Y Tucano goes downstream and river depth permitting, will enter an east bank affluent of the Rio Negro and explore on deep into the rainforest on this small river. After a nocturnal exploration of the rainforest in the launches you return to the Motor Yacht Tucano for “Caipirinha Night” and perhaps try a bit of samba on the top deck.

You begin the day with a dawn excursion hunting for wakening wildlife followed by a full Brazilian breakfast. You will then go one last time into the forest. In the mid-afternoon you will begin to journey downstream to arrive late in the day at the “Encontra das Aguas” a stark several mile-long line where two of the world’s largest rivers, the Amazon and the Rio Negro join in a turbulent maelstrom.

Here the dark water of the Negro runs beside the opaque brown water of the Amazon. At sunset the M/Y Tucano will once again turn her bows upstream on the Rio Negro and journey to an overnight anchorage north of the city of Manaus. As you pass in front of Manaus, you will marvel at the scale of one of the world’s largest and most vibrant port cities, that is over one thousand miles from the sea. Tonight there will be a farewell dinner.

In the early morning, after a hearty breakfast, disembark from the M/Y Tucano.  Private transfer to Manaus Airport. 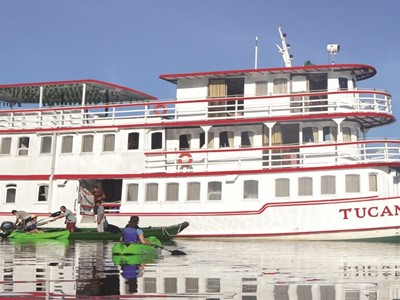 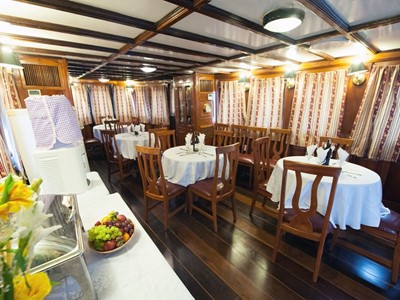 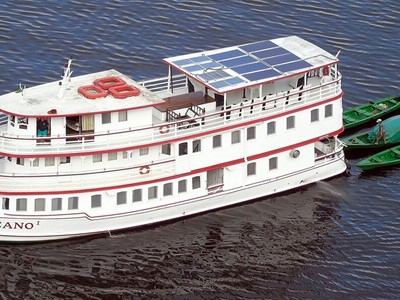 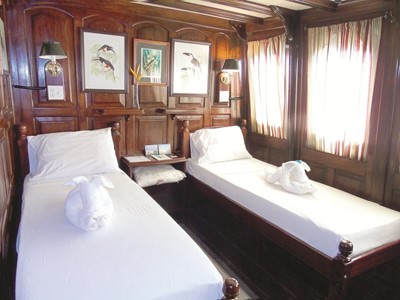 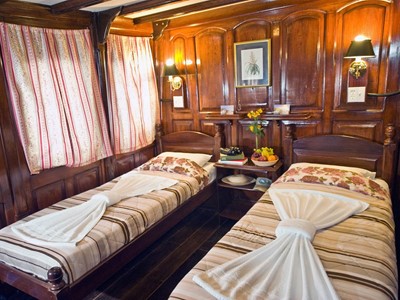 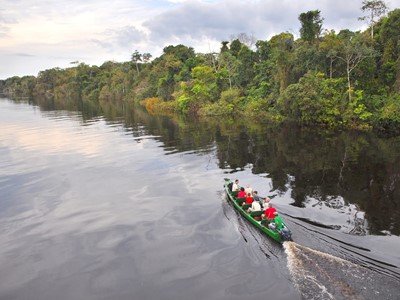 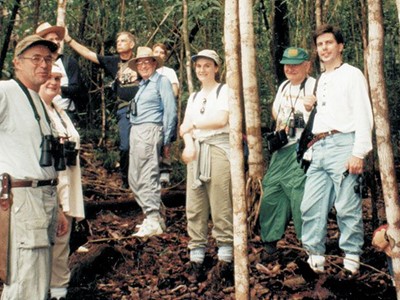 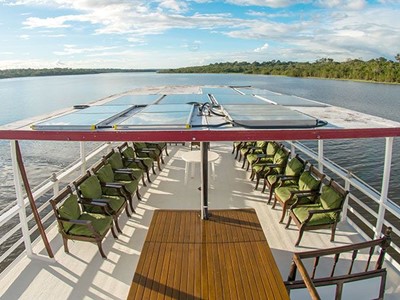 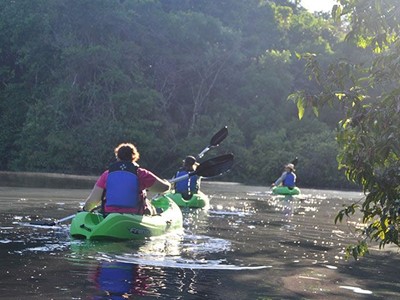 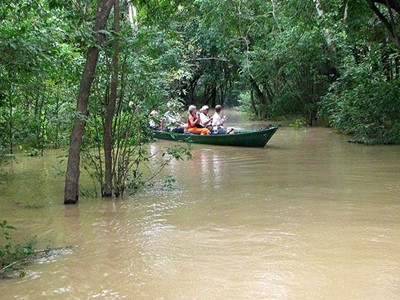 "WE STARTED WORKING WITH THIS TRAVEL COMPANY WITH LESS THAN 4 WEEKS TO GO TO HELP US PLAN OUR TRIP TO BRAZIL AND ARGENTINA."

They patiently worked with us during the Brazilian visa application process, changes to departure and return dates, and itinerary changes.  Never once did they say “sorry, we can’t help you with that”.  Whether it was making us dinner reservations, recommending tours, or coordinating all the ‘behind the scenes” activities they were always very accommodating.

Their South American partners that were assigned to us were terrific – airport transfers, tours, guides were all top notched.  I would recommend them to others and would use them again in a minute!