A round-trip tour from Punta Arenas, visiting the stunning landscapes and wildlife of Tierra del Fuego for
6D/5N Starting at $3657.00 per person

The first tour of its kind, our Gauchos, Glaciers & Penguins Patagonia expedition provides a round-trip experience from Punta Arenas, visiting by land and sea the stunning landscapes and wildlife of Tierra del Fuego.

While on a Cape Horn cruise, we visit a small King Penguin colony, before overnighting at Tierra del Fuego and next day visit an estancia for a true gaucho experience. We’ll then make our way into the lovely port of Ushuaia where we will embark on the Stella Australis. 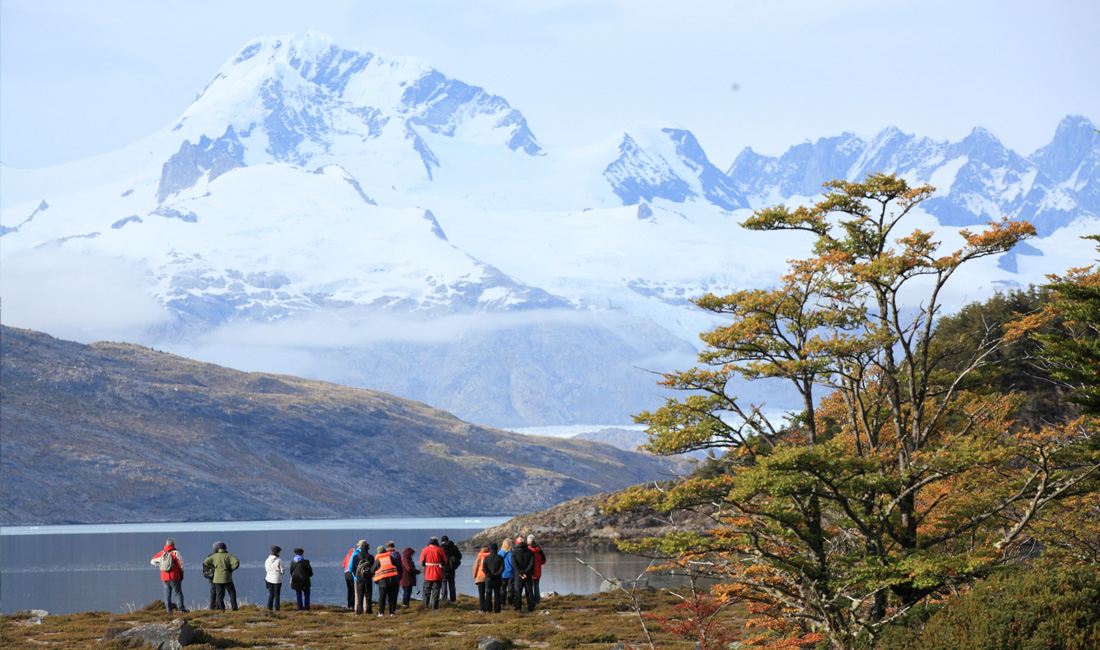 During this Patagonia adventure, we visit areas only accessible using our small expedition ship. our excursions via zodiac take you sailing on Cape Horn, where you have the opportunity to disembark (weather and seas permitting), Wulaia Bay, a colony of Magellanic Penguins, stunning glaciers and other areas visited by the great explorers.

The voyage will end in charming Punta Arenas. 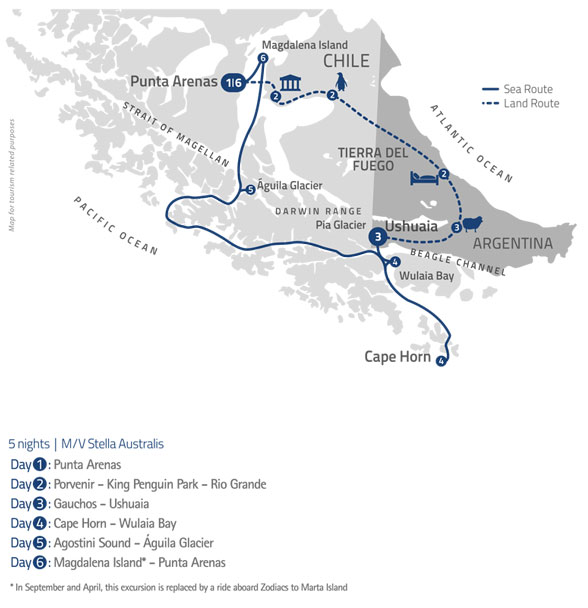 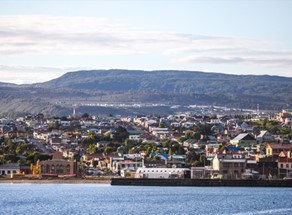 Arrive in Punta Arenas and transfer from the international airport to the Hotel Cabo de Hornos on the main square in downtown Punta Arenas.

The journey begins early in the morning with a ferry crossing of the Strait of Magellan from the Punta Arenas waterfront to the town of Porviner on the north shore of Tierra del Fuego. The ferry journey normally takes around two to four hours depending on the weather and sea conditions. Founded in the 1880s, Porviner was settled by many Croatian immigrants and for a brief time was the hub of a local gold rush. Despite it's small size, the Museo de Tierra del Fuego makes a worthwhile stop, with exhibits that range from 600-year-old Selk'nam mummies to the historian of Patagonian cinema. 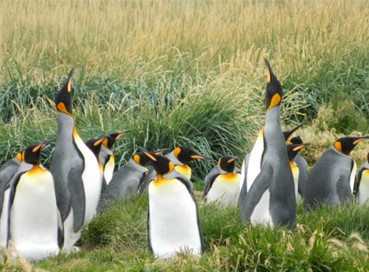 From Porvenir we follow the coast road along the north shore of Useless Bay (Bahía Inútil), which received its unfortunate name from British sea captain Phillip Parker King who found "neither anchorage nor shelter, nor any other advantage for the navigator" while surveying the bay in the 1820s. King penguins have taken up residents along a tidal stream at the bay's eastern extreme, around a hundred birds protected within the confines of a small private reserve called the Parque Pingüino Rey. A well-marked trail leads down to the shore and blinds with views across the stream to the penguin nesting area. Nearby is the pioneer cemetery for the historic Estancia Caleta Josefina, a windswept graveyard that shelters the remains of Scottish settlers including several "killed by indians." Twenty miles (29 km) farther east is the San Sebastian border crossing, where travelers pass through Chilean and Argentine frontier posts. The cross-island highway soon reaches the South Atlantic and a smooth run down the coast to Rio Grande.

The industrial hub of Tierra del Fuego, Río Grande has flourished on sheep farming, energy extraction and more recently factory production. A large military base and monuments along the coast road attest to the fact that Río Grande was also an Argentine military staging area for the Malvinas (Falklands) War. Overnight at a Río Grande hotel or estancia. If dinner is not included in your hotel stay, try to feast on a genuine Argentine steak and Quilmes stout at the Posada de los Sauces restaurant and bar near the Rio Grande waterfront. 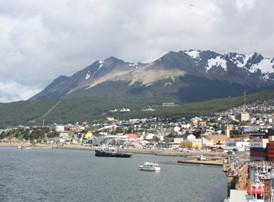 We start the day with a gaucho experience and Patagonian-style "asado" barbecue at the 80-year-old Estancia Las Hijas, located about 50 miles (80 km) south of Rio Grande. Back on the road, the highway leaves the pampas behind for a landscape of Magellanic forest with snowcapped mountains in the distance. Herds of guanaco graze meadows on either side of the road. A brief stop in the hilltop town of Tolhuin affords views of Lake Fagnano, the island's largest freshwater body. There's time to munch pastries at the legendary Panadería La Unión before hitting the road again. Cutting through the southernmost part the Andes, we arrive at Ushuaia for check-in, boarding the Stella Australis and departure.

By early morning, Stella Australis is cruising across Nassau Bay into the remote archipelago that includes Cape Horn National Park. Weather and sea conditions permitting, we shall go ashore on the windswept island that harbors legendary Cape Horn (Cabo de Hornos). Discovered in 1616 by a Dutch maritime expedition -- and named after the town of Hoorn in West Friesland -- Cape Horn is a sheer 425-meter (1,394-foot) high rocky promontory overlooking the turbulent waters of the Drake Passage. For many years it was the only navigation route between the Pacific and Atlantic, and was often referred to as the "End of the Earth." The park was declared a World Biosphere Reserve by UNESCO in 2005. The Chilean navy maintains a permanent lighthouse on the island, staffed by a lightkeeper and his family, as well as the tiny Stella Maris Chapel and modern Cape Horn Monument. 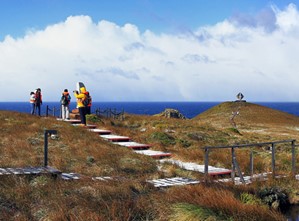 Sailing back across Nassau Bay, we anchor at fabled Wulaia Bay, one of the few places in the archipelago where the human history is just as compelling as the natural environment. Originally the site of one of the region’s largest Yámana aboriginal settlements, the bay was described by Charles Darwin and sketched by Captain FitzRoy in the 1830s during their voyages on the HMS Beagle. This area is also renowned for its mesmerizing beauty and dramatic geography. After a visit to the Australis-sponsored museum in the old radio station -- which is especially strong on the Yámana people and European missionaries in the area -- passengers have a choice of three hikes (of increasing degrees of difficulty) that ascend the heavily wooden mountain behind the bay. On all of these you will be strolling through an enchanted Magellan forest of lengas, coigües, canelos, ferns, and other endemic fauna to reach a panoramic viewpoint overlooking the bay.

After nightfall we reenter the Beagle Channel and sail westward along the southern edge of Tierra del Fuego into a watery wonderland protected within the confines of Alberto de Agostini National Park. Part of the channel is called Glacier Alley and on full moon nights you can often see several of the seven major glaciers that give the passage its name. Rounding the Brecknock Peninsula as the western extreme of Tierra del Fuego, Stella Australis is for a brief time exposed to the open Pacific. We then navigate a zigzag route through the Cockburn Channel, Magdalena Channel and Keats Fjord to reach scenic De Agostini Sound. 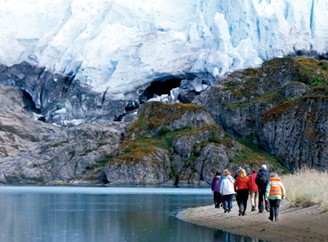 Named after an Italian Salesian priest who worked among the region's indigenous people during the first half of the 20th century, De Agostini Sound is flanked by numerous glaciers and sheer saw-toothed peaks reminiscent of Torres del Paine. Our shore excursion this morning is Águila ("Eagle") Glacier, which hovers above a placid glacial lagoon surrounded by primeval forest. After a Zodiac landing on the beach, passengers hike around the edge of the lagoon to a spot near the base of the frozen facade. Condors can sometimes be seen winging high above, but there is always abundant bird life around the lagoon. This landing provides the perfect opportunity to experience the beauty of Patagonia’s sub-Antarctic rainforest and to see how the power of nature has molded the spectacular landscape.

After an overnight cruise back into the Strait of Magellan, we anchor off Magdalena Island, which lies about halfway between Tierra del Fuego and the Chilean mainland. 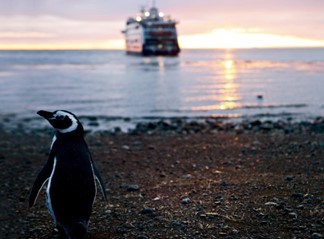 Crowned by a distinctive lighthouse, the island used to be an essential source of supplies for navigators and explorers and is inhabited by an immense colony of Magellanic penguins. At the break of dawn, weather permitting, we go ashore and hike a path that leads through thousands of penguins to a small museum lodged inside the vintage 1902 lighthouse. Many other bird species are also found on the island. In September and April -- when the penguins dwell elsewhere -- this excursion is replaced by a ride aboard Zodiacs to Marta Island to observe South American sea lions.

After a short sail south along the strait, disembarkation at Punta Arenas is scheduled for around 11:30 AM. 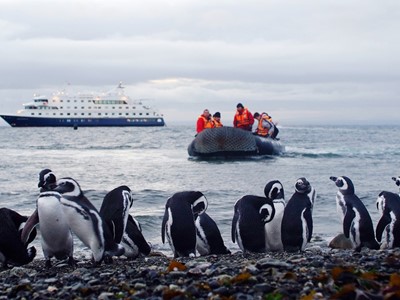 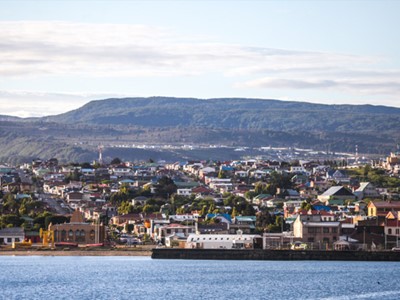 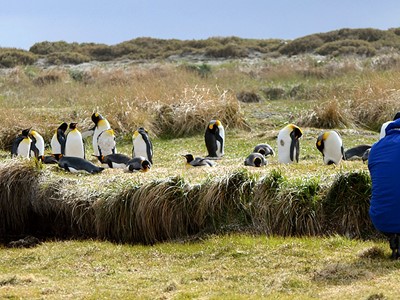 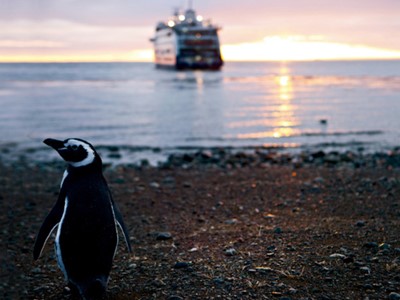 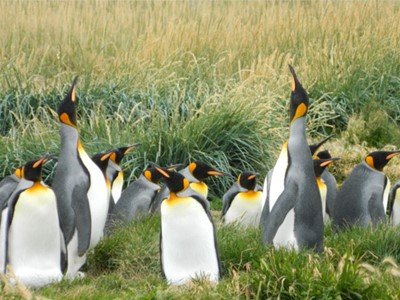 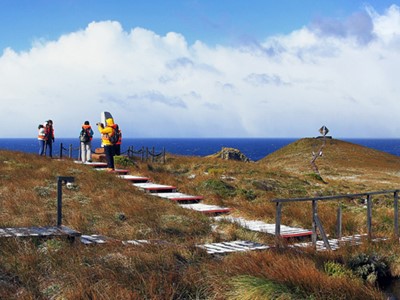 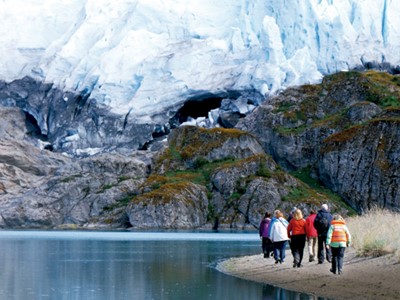 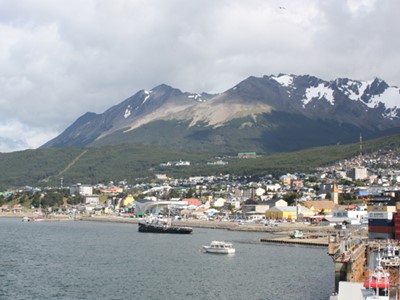 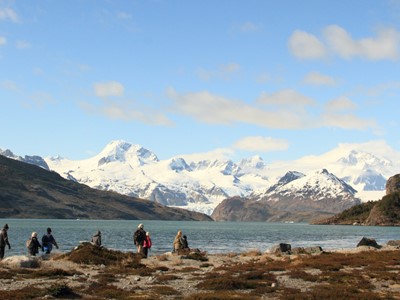 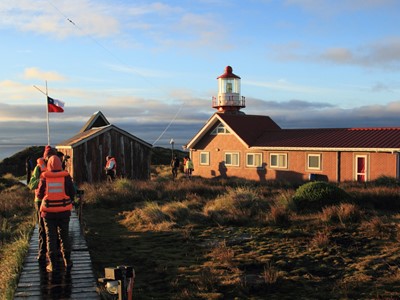 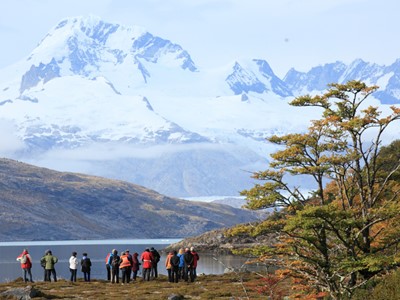 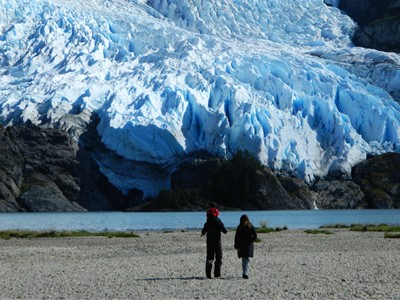 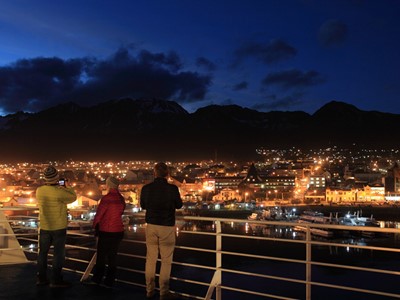 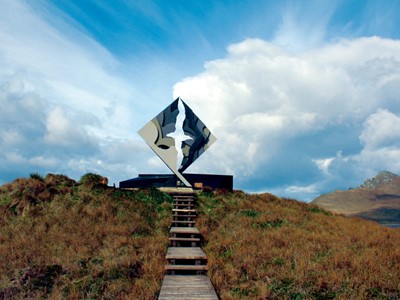 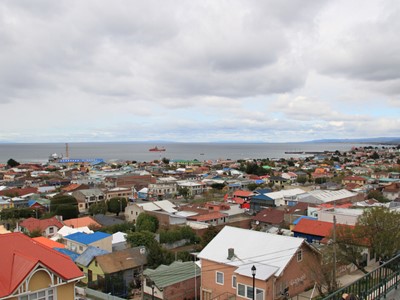 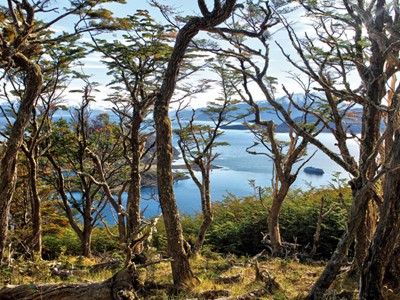