From the dramatic landscape of Leh, you travel to the high altitude lake of Tso Moriri and wander at 15,500 feet looking at nomadic camps and their lifestyles. 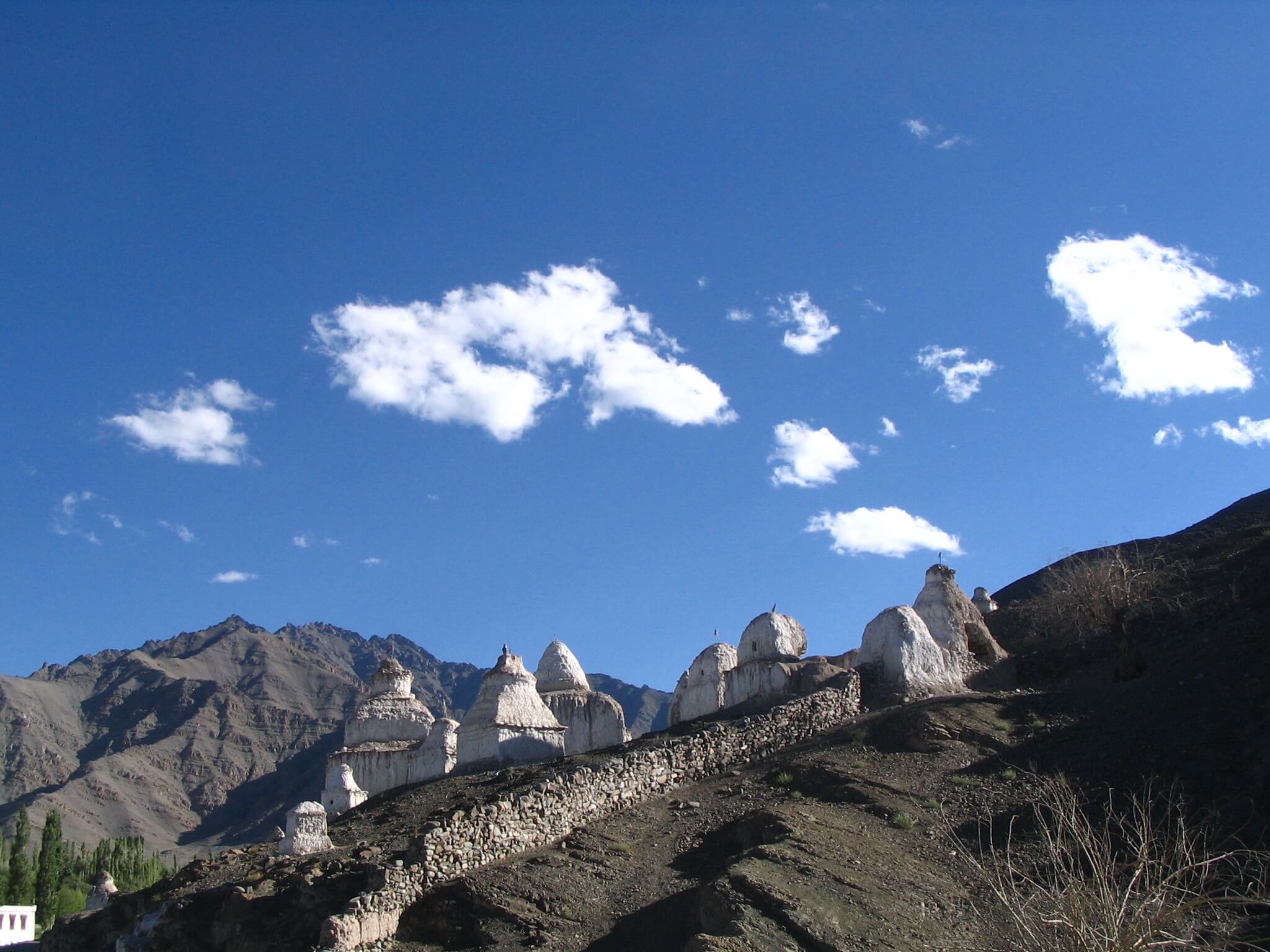 Return to explore the monasteries that hold the secret of balance woven intrinsically in the thought of Buddhism.

The Prince of Stok and the mysterious oracles heighten this inner and outer journey.

You will be met at the Delhi Airport and transferred to your hotel. Overnight The Claridges New Delhi, breakfast included - 2 nights.

A historical landmark, the charming hotel offers exquisitely appointed rooms and suites, an array of celebrated dining options and dedicated leisure and business facilities, warmly embraced by classic architecture and perfectly complemented with expansive lawns – an ideal destination for the discerning traveler. It’s located in the heart of the city in a premier residential zone.

After breakfast, set off for a guided tour of Delhi.

The tour begins with a visit to the magnificent Red Fort followed by a cycle rickshaw ride through the narrow lanes of the fascinating bazaar in Old Delhi.   During the tour, you can visit the fascinating spice market in old Delhi in Khari Baoli area.

You will be transferred to Delhi airport early this morning to board your flight to Leh (3500 m/11500 ft).

On arrival, you will be met by the local representative and transferred to your hotel. On this day, it is important for you to take it completely easy to allow for good acclimatization, taking plenty of liquid and relaxing.

In the evening at dinner Raja Jigmed of Stok will join you and will talk to you about his family, Ladakh and some of the reconstruction and restoration work he is doing through his NGO, NIRLAC (Namgyal Institute for Research on Ladakhi Art and Culture)

This morning, you can still take it easy for further acclimatization and then go out for a half day sightseeing after lunch. You will be taken by a Ladakhi guide to the monasteries of Shey and Thiksey and if time permits, the Hemis monastery.

The 12-story monastery complex contains numerous stupas, statues; Thangkha, wall paintings, swords and a large pillar engraved with the Buddha's teachings, there are sacred shrines and a many precious objects to be seen. The successive reincarnation of the Skyabje Khampo Rinpoche act as in charge of the monastery.

Thiksey Gustor (festival) held from 17th to 19th day of the 12th month. The main prayer hall has a 15-meter-high seated Buddha figure.  There are chance to see prayer in the early morning.

Shey, 15 Km south of Leh was constructed by the first king of Ladakh, Lhachen Palgyigon and of successive kings. Around 12 ft Shakyamuni Buddha’s statue made by copper guilt is the largest in the region, built by Deldan Namgyal in 1633 is a funerary memorial to his father, King Singee Namgyal.

There is another statue of the Buddha three stories in height at Dresthang down the castle. Stone carving and many chortens are scattered around the Dresthang Gompa. On the 30th day of the 1st Tibetan month celebrates Shey Rul-lo and on the 10th day of the 7th Tibetan month the festival of Shey Surb-lo is held.

Hemis monastery is one of the most famous and largest of all monasteries in Ladakh, 45 kms south of Leh founded in 17th century belongs to the Drukpa order. Stagsang Raschegn who was invited to Ladakh by King Singee Namgyal founded the monastery. The king offered him religious estates and attended him as his principal guru.

After breakfast, you will be driven to the Alchi and Rizong Monastery (70 kms, 2 hours away) accompanied by a Ladakhi guide, your cook and other staff. You then continue your drive to Chilling (3200 m/10500 ft).

The village at Chilling is famous for producing some of the best metal work in Ladakh. You may visit the home of copper makers. Overnight at a private trekking camp, all meals included.

After breakfast, the pony men will arrive and the trek starts with the ponies, and all the staff.

You will cross the river Zanskar by a local trolley strung up on a wire and follow a path until Skiu (3390 m/11120 ft) or a little beyond to your campsite. Overnight at a private trekking camp, all meals included.

After breakfast, you begin your trek a little beyond the village and enter into the narrow valley of Shingo (5100 m/16700 ft). Overnight at a private trekking camp, all meals included.

After breakfast, you begin a long and steady climb to Ganda La (4700 m/15400 ft). Descend into the beautiful valley and pass the village of Yurutse and then cross the river on  the right bank.

You then follow the mountainside until Rumbak (4900 m/16070 ft). Rumbak is part of the Hemis National park and in the habitat zone of the famous Himalayan Snow Leopards.

Overnight mobile camp or you may use rooms of a local Ladakhi home that is used as a home stay for income generation for the local community. All meals included.

After breakfast, you complete your short trek to Jingchen (3380 m/11090 ft) where you meet your transport and will be driven onto Stok.

The afternoon after a wash and change you may wish to proceed and spend the evening in Leh town exploring the alleyways, artifact stores and street markets.

We drive back to the Leh Airport for our flight to Delhi.

Day use of a hotel close to the airport will be arranged before your evening departure homeward. 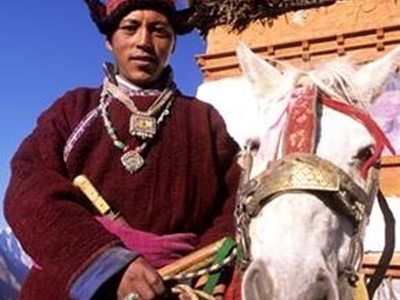 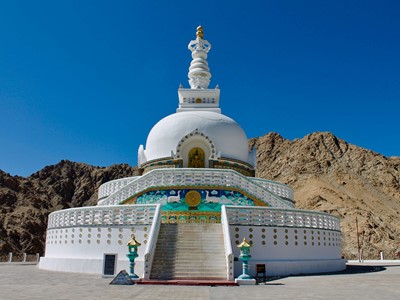 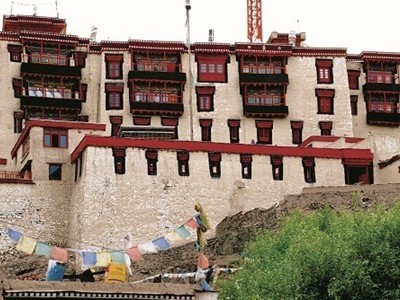 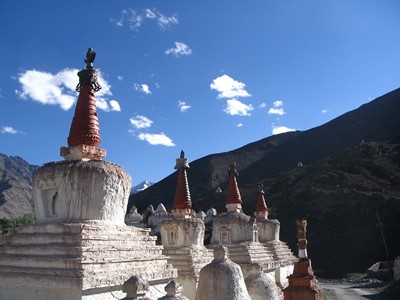 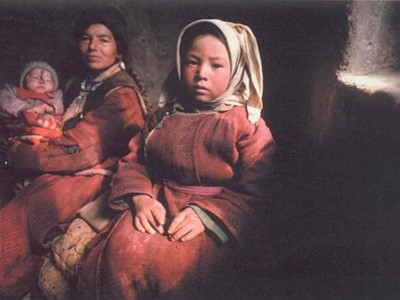 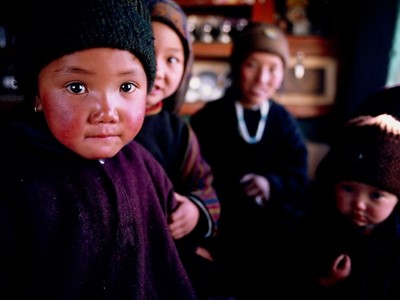 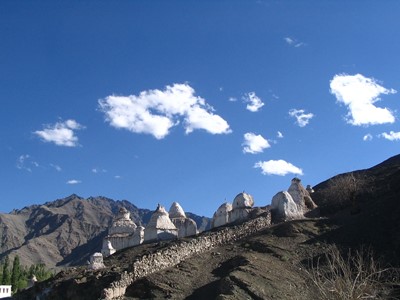