To the Heart of India - Photography Tour

A center of handloom weaving since the 5th century, Maheshwar is steeped in and home to one of India's finest handloom fabric traditions.

We have seen some of these arts dying but some being revived. The handloom industry in India is mostly male dominated but there are NGOs out there that have invested in training women. 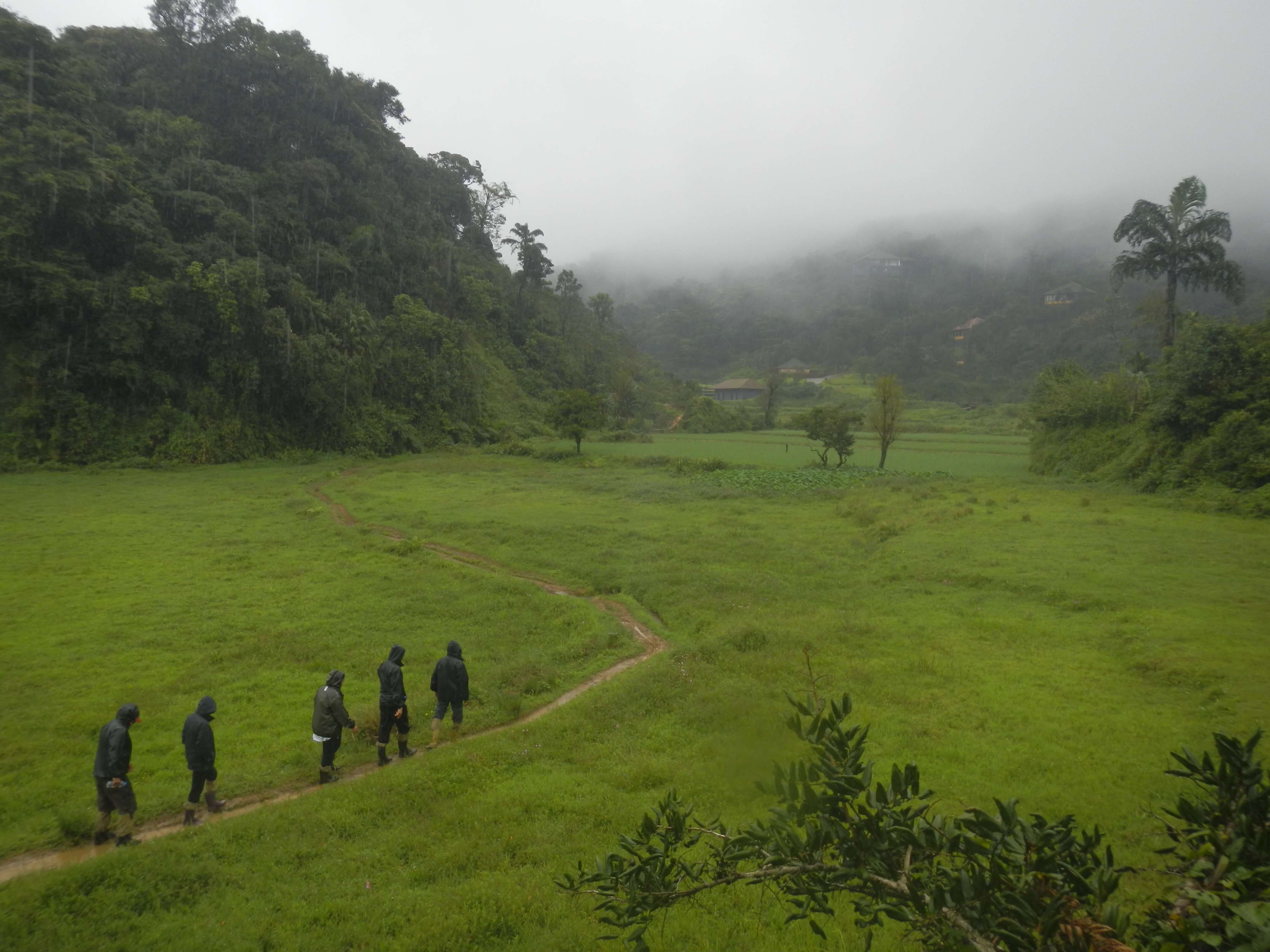 Focusing on the fascinating and rarely visited state of Madhya Pradesh in the Heart of India, we will visit people in their villages set in undulating untouched countryside; we visit superb medieval Hindu temples and master weavers. This is drop of paradise that is far less visited.

Reckoned amongst Asia’s finest hotels, The Imperial is a legend that offers a unique experience embracing facets of India’s history. The 24 king palms, that lead up to the porch, stand a witness to the creation of New Delhi.

Conceptualized in 1934 by Bloomfield and inaugurated by Lord Willingdon in 1936, it was in Lutyen's scheme of things to build the most luxurious hotel in New Delhi. As New Delhi’s landmark Hotel, it is located on Janpath, the erstwhile Queensway.

It is steps away from the renowned shopping district and major city attractions and a half- hour drive from the international airport. The Imperial is an ode to India’s independence from the British Raj and was built as a jewel in the crown of the outgoing rulers.

Breakfast Trail in Old Delhi (8:30 am - 11:30 am): a morning food walk to relish all those dishes which are available only in the mornings, and not in other parts of the day. Also, meet the polishers at Qalai ghar- and the practice of cleaning big brass utensils called Qalai ka kaam.

Talk to the local chefs called, Bawarchi, meet the goat herders and visit Asia's largest spice market and a Sikh temple to understand the concept of community kitchen called, langar.

You will then be met by your guide to visit the largest monument in India, Jama Masjid take a rickshaw ride through narrow alley ways to famous antique shops.

This is a 12th century Sultanate period outstanding complex. The Qutab was the tallest tower in world for centuries, erected by first Islamic rulers of India; still the most imposing, artistically carved & engraved sandstone pillar anywhere!

4th century inscription on renowned rust-free ancient Iron Pillar on premises adds to mystique & allure of unique monument. The Qutab Minar towers over this historic area where Qutabuddin Aibak laid the foundation of Delhi Sultanate in 1193.

Lunch at a rustic hideaway, Olive Bar and kitchen under a canopy of trees, payable by you.

As you had an early start to your day, you may want to head back to your hotel or visit the local markets located walking distance from your hotel.

This morning, we take the early morning flight to Indore and drive 2 hours to Ahilya Fort at Maheshwar where we stay for 3 nights.

We will take an evening boat trip to the Baneshwar temple in the middle of the river and view the lovely sunset. As per Hindu texts, some people believe this is the centre of the Universe.

We end with a walk along the river and photograph the riotous laundry that the ‘dhobi’s’ have laid out.

The Ahilya fort was restored beautifully by Richard Holkar, descendent of Ahilya Bai in 2000. Staying here is a privilege to a lesser known part of India as a guest of the erstwhile royal family of Indore. Its ramparts reach the Narmada River, where you can witness every day Indian life unfold by its holy waters.

Planned and built by Rani Ahilya Bai, the brave Holkar queen, Indore is situated on the banks of the Saraswati and Khan rivers and the city derives its name from the 18th century Indreshwar temple.

Located on the banks of the Narmada River, Maheshwar was identified as an important cultural and political centre that finds mention in the Ramayana and Mahabharata. The town was restored by the Holkar Queen Rani Ahilya Bai of Indore. The Palace inside the fort is now a museum that exhibits the treasures from the royal family.

Inside the fort is the Rehwa Weavers Society, which produces the exquisite Maheshwar saris. The Holkars have been the force behind the revival of the Maheshwar fabrics.

Maheshwar’s weaving traditions were revived in the 1970’s and about 150 men and women work with the Rehwa Society to produce a range of delicate hand-woven textiles in silk, cotton, linen and wool. All proceeds go direct to the local community.

You will be able to interact with the weavers of Maheshwar and there will be an interpreter so you can understand the history of the fine textile and its restoration.

After we have had breakfast at the Fort, we will drive 65 kms (1 ½ Hours to Mandu, a 15th century city with marvels of early Islamic architecture.

We will arrange a packed lunch at Mandu or a picnic lunch near the old gates to Mandu, the Tarapur Darwaza.

Mandu or the ‘City of Joy’ embodies the love of the poet Prince Baz    Bahadur for his consort Rani Roopmati. The Balladeers of the region still sing about their love. Each structure in Mandu is an architectural gem.

After a day filled with romance, we weave our way back to the Ahilya fort for our last night.

After breakfast, if time permits, you can visit Omkareshwar, a riverine island at the confluence of the Narmada and Cauvery rivers known for its medieval Brahmanic temples. The tiny island consists of two hills and a valley thought to resemble the Hindu symbol Óm’. Here you can see 10th century architecture and 24 Avatars of the Jain temples.

We then travel to Bhopal, the capital of Madhya Pradesh.

Tonight, we are hosted by the family for dinner with recipes that have come down through generations and are ancestral recipes. We interact with the family of Faiz and Aly, the owners of the Jehan Numa Retreat if in residence.

Today you will take a day trip from Bhopal to Sanchi to visit the Great Stupa.

The Sanchi Stupa is the oldest stone structure in India, originally commissioned by Emperor Ashoka in 3BC after his conversion to Buddhism. Essentially an engraved hemispherical stone structure with relics of the Buddha, the Stupa is a site for meditation and veneration, and is an important destination for Buddhist pilgrims.

You will return to Bhopal in the late afternoon/evening after which you are free to step out and explore the state's capital city.

If time permits, we will visit the markets. The labyrinthine alleys, weaving towards the Jama Masjid, stock delicate gold and silver jewellery, fancifully woven saris, hand-embroidered appliqué skirts and jari (glittering embroidery, often including shards of mirror or glass) shoulder bags, a speciality of Bhopal.

Bhopal: Said to have been founded by King Bhoja of the Paramara Dynasty, this capital city of Madhya Pradesh is known as the city of lakes. It is home to a number of famous mosques and temples, Lakshmi Narayan Temple, Kalighat, Taj-ul-Masjid, both Diwali and Eid are celebrated with gusto in this city.

Paan eating is rampant here, and can be found in various combinations and flavours, and local food is relatively milder and has a unique taste.  Popular snacks and street-food can be easily found around town.

We leave after breakfast to visit the caves on our way to the Bhimbetka caves, a UNESCO declared World Heritage site.

Bhimbetka is where India’s rich collection of prehistoric cave paintings was discovered in 1957. Over 600 rock shelters – the largest group in the world – have paintings that date back to the Stone age depicting hunting, dancing, music, horse and elephant riders, animals, honey collection, household scenes, rituals and religious symbols.

We finally arrive at Satpura and check into the very charming Reni Pani Lodge where you are hosted by the brothers Ali and Fez.

Reni Pani Jungle Lodge, named after a nearby tribal village, is located in a forest typical of the Satpura Tiger Reserve. Its forest environment along with the patches of agricultural land attracts bird and wildlife into the lodge premises.

This evening you will be accompanied by a resident naturalist on a boat safari through the Park. You will cruise down the Denwa River into the mammoth tawa dam, a haven for birdlife and the home of the Indian Fresh Water Crocodile. Otherwise, you can travel upstream to the Son Bhadra nallah that gives to a spectacular view of the river valley.

Satpura National Park covers 1500 sq. km of a unique Central Plateau Highland ecosystem, with rugged terrain, valleys, rivulets, waterfalls and narrow gorges. The park is rich in biodiversity, and is the abode of numerous species of flora and fauna.

The area's stunning topography, coupled with the abundance of wildlife it contains caters to a variety of interests and a combination of ways to explore them.

This morning start with a village walk, visit the local tribal area, craftsmen, and learn about the unique local architecture, and of the lives and livelihood of its denizens.

Today, we will bring in a Gond artist to meet with you and show their paintings. A tribal art where stories were told through paintings, an expression of their everyday quest for life.

In the evening a dinner and a cookery demonstration by the Chief Chef, Mahadev who has mastered the family recipes.

This morning you will be taken on a jeep safari through a different section of the park. You will have a guide who can explain the indigenous flora and fauna. You'll be served breakfast on your return to the lodge.

Evening safari enchants you with a different mood, as the sun starts to set and seen are- Crested Serpent Eagle, Kingfishers, Grey Wagtails, Tickel's Blue Flycatcher and Indian Vultures.

We drive back to Bhopal to board our flight to Delhi.

Day use of a hotel close to the airport will be arranged before your evening departure homeward. 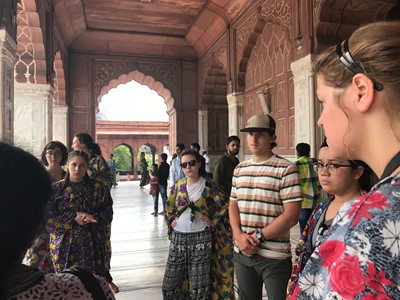 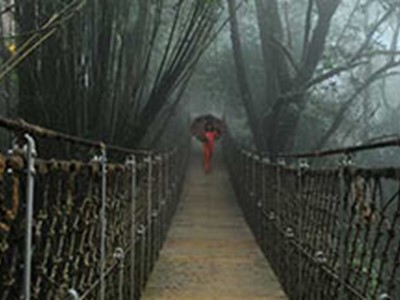 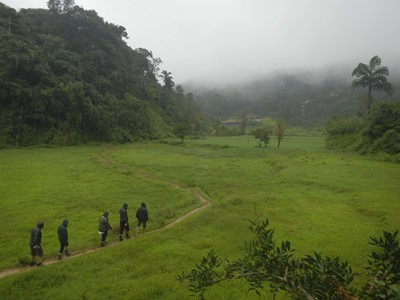 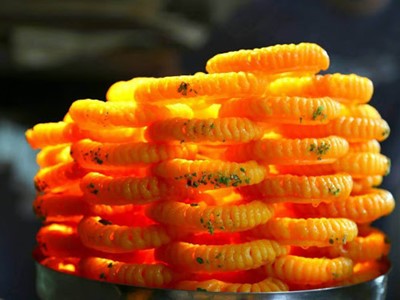 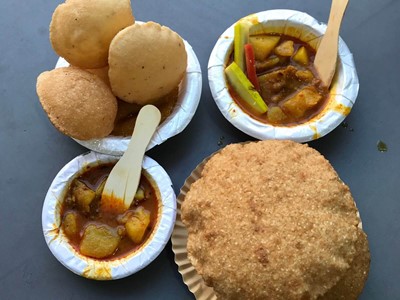 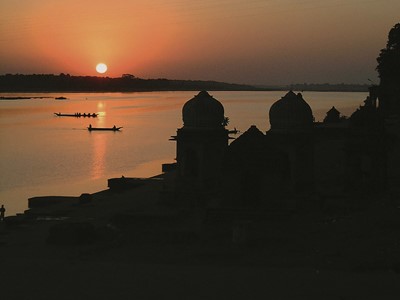