Begin your trip traveling from Santiago to Easter Island, a place like no other.

Get ready to listen and discover the fascinating history of the mysterious moai as you spend 3 days enjoying guided excursions all over the island to the sites of these enormous rock figures. Learning their intriguing symbolism and the hypothesized methods of creation and transportation is sure to fuel curiosities and instill wonder.

You will have plenty of opportunities to take advantage of the amenities of your Easter Island Eco Village and Spa, which include a pool, bars, spa, restaurants, and more. 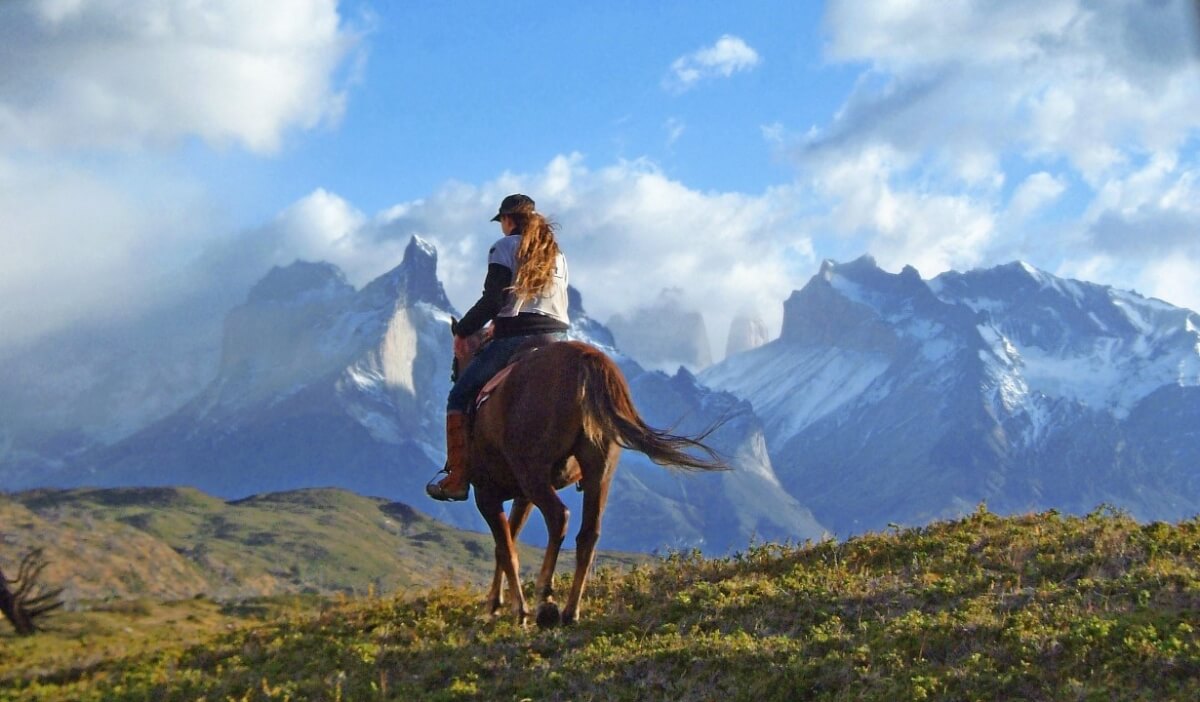 After leaving the island, spend one more night in Santiago before continuing to Punta Arenas to enjoy the second half of your trip from within Torres del Paine National Park. Here, you can choose your activities by the day, and expect every option to be teeming with natural wonder and breath-taking vistas.

Between the rugged Patagonia mountain treks and the glacial waters that flow through and around the park, this beautiful experience is sure to amaze, excite, and thrill any traveller.

You will be met at the airport by your guide and transferred to your hotel.

The Hotel Orly is a small, boutique style hotel which has 28 rooms. Once a private mansion home, the hotel is superbly situated in one of the city's more exclusive areas, Providencia. Everything you may want to see is close by - shops, restaurants, downtown, museums, banks and the cable car up San Cristobal Hill. And should you require any assistance the staff is extremely helpful in pointing you in the right direction. Daily breakfast included - 2 nights.

Free day on your own or on an optional guided excursion.

Transfer to the airport for your flight to Easter Island, an island of volcanic remains, known for its massive and mysterious moai statues. Upon arrival you will be met and transferred to your Easter Island hotel.

You will have daily options of excursions that explore the sights of the iconic island from the rigid coast lines to Ahu Tongariki. You will visit numerous sites that hold the colossal moai statues and will be engagingly informed on their origin and historical context.

Today’s full-day tour includes Akahanga, Te Pito Kura, Rano Raraku and Anakena Beach: You will be met at your hotel by your guide and begin your visit at Vaihu in Hanga Te’e Bay, off the South Coast road, to find the non-restored ahu (platform in Rapa Nui language) with knocked down moais as well as red topknots (pukao). Further south along the coast is the important site of Akahanga where the royal chiefs often resided, with four platforms, twelve Moais, eight topknots, and the remains of several "boathouse" foundations.

Continue to the Rano Raraku Volcano, also known as “The Factory”, containing the quarry in which practically all existing Moais were sculpted and from where they were transported to various points of the island. Come across around 300 moais in various stages of completion, including one measuring a staggering 21 meters in height.

The Ahu of Te Pito Kura has the largest Moai transported from the Rano Raraku quarry. It measures 11 meters high and weighs approximately 80 tons. It is located approximately 26 km northeast of Hanga Roa.

Located at the north with clean and warm turquoise waters, Anakena is the island’s main beach. For many years, its coral sand beds and great luminosity were for the exclusive use of important people and governors. It was a population and political organized center, and the Polynesian expeditions pertaining to the Ariki Hotu Matu’a, the island’s first king, disembarked at Anakena some 1,500 years ago.

This morning's half-day tour includes Orongo, Vinapu, Anakai Tangata: Orongo was the site of the famous annual Tangata Manu (birdman) tournament, in which the competitors would climb down the cliff and swim across to Motu Nui (which means “big island” in the Rapa Nui).

Carry on to Ahu Vinapu to find the ruins of two moais and one of the platforms bearing a striking resemblance to the stone masonry work in Machu Picchu. This is one more mystery of Rapa Nui: Inca oral history tells of a voyage to the west by the Incan King Tupac Yupanqui and his discovery of two "Islands of Fire". The precisely carved and fitted stone walls at Ahu Vinapu may evidence that visit.

Ana Kai Tangata is the only cave where you can still see paintings on the walls and ceilings. Scholars have speculated on the source for the name of this cave, as it is literally translated as meaning "man-eating cave." (Kai = to eat; Tangata = man). Some 'smart people' like to jump to the conclusion that the ancients practiced cannibalism; however there is no proof to support this theory. The paint used to decorate the ceilings of the cave is the same the Rapa Nui used to paint their bodies.

The afternoon half-day tour includes Akivi, Ana Te Pahu, Puna Pau: Continuing with this journey, take a pleasant walk to Ahu Akivi, where seven beautifully-preserved Moais in the archaeological centre at Roiho are found. These were the first Moais to be restored on the island back in the 1960s. This ceremonial site is also surrounded by numerous legends.

The seven Moais represent the first seven explorers sent to explore the island by the King Hotu Matua and are the only Moais facing the ocean. 700 meters away from the backs of the Moai are two stone columns. During the summer solstice (December 21), the sun appears to be wedged exactly between them, an example of the early inhabitants’ mastery of astronomy.

Afterwards, your adventure continues walking along a somewhat stony path on the West coast of the Island bordering steep cliffs with spectacular views, arriving to the Ana Te Pahu caves. These caves, also known as the “Banana caves”, are among the largest on the island and are interesting not only because of their location, but also for the legends that surround them. It is said that many island rulers used them as “official residences”. Moving inland towards Hanga Roa, reach the Puna Pau quarries on the slopes of a volcano. The Moais’ reddish topknots were quarried and sculpted there.

Transfer to the airport for your return flight to Santiago.  Upon arrival, transfer on your own to the Holiday Inn Santiago Airport Hotel, located adjacent to the terminal.  Breakfast included.

Transfer on your own to the airport terminal. Check in for your flight to Punta Arenas.

You will be met at the Punta Arenas Airport upon arrival and depart on your transfer to Torres del Paine. Upon arrival at Hotel Las Torres, you'll be assigned to your comfortable room accommodations. After settling in you will be orientated to the lodge and the surrounding region.

The Hotel Las Torres is a private working estancia and a comfortable, casual and relaxed 4-star lodge within Torres del Paine National Park. The hotel is in a remote location with no other restaurants or hotels nearby. This is an authentic Patagonian experience with the local "baqueano" (gaucho) culture and the food focuses on regional and traditional gastronomy. There is a small shop where guests can purchase some trekking equipment, snacks and toiletries. There is an onsite organic garden and a small microbrewery. Hotel facilities include the Coiron Restaurant, Pionero Bar, Spa. The horse stables are 100 meters from the hotel.

The impressive Andean massifs of Torres del Paine are surrounded by glaciers, waterfalls, lakes and lagoons, which together make this national park famous throughout the world for the richness of its natural beauty. Over the next few days you'll enjoy a variety of excursions in the park. Included in the package are all meals and open bar (premium liquors and wines not included), guided excursions and use of all Spa facilities. A variety of 16 excursions are available every day. You can consult with the specialized guides about the various excursions.

Days of guided excursions of the park.  A menu of the excursions with detailed description can be provided upon request.

Transfer back to the Punta Arenas Airport for your flight to Santiago.  Connect with your international departure. 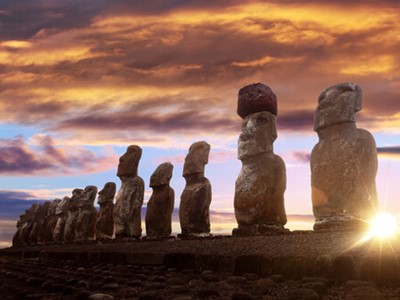 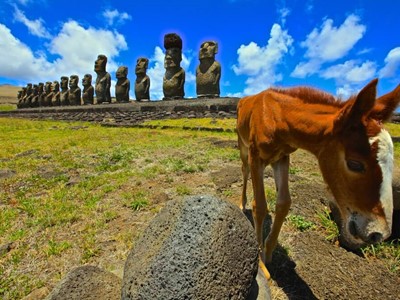 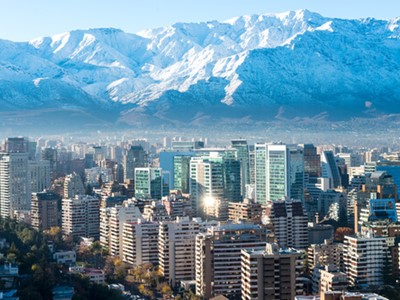 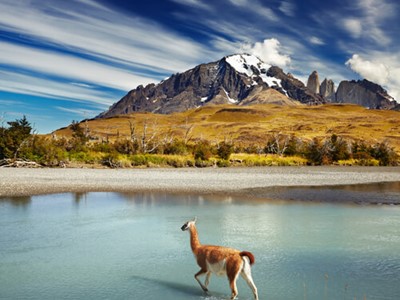 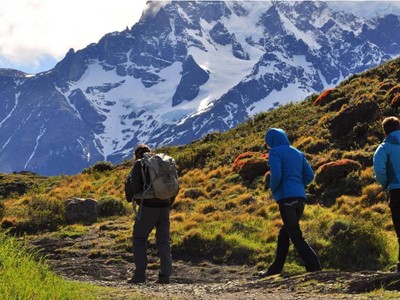 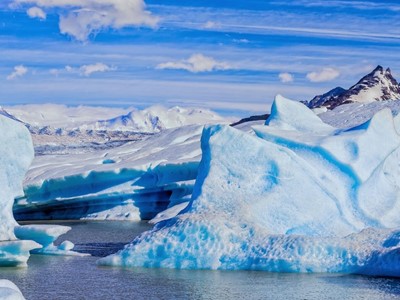 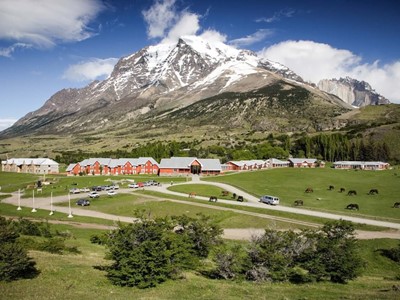 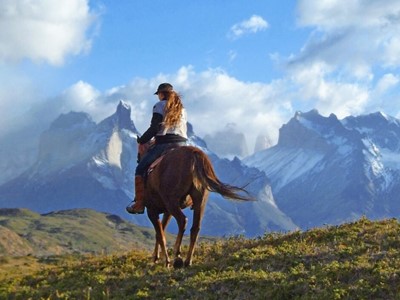 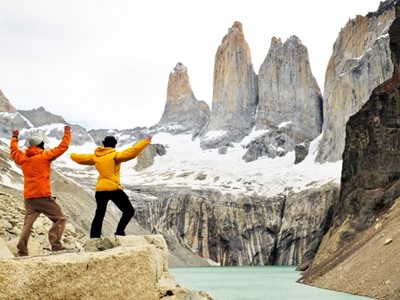 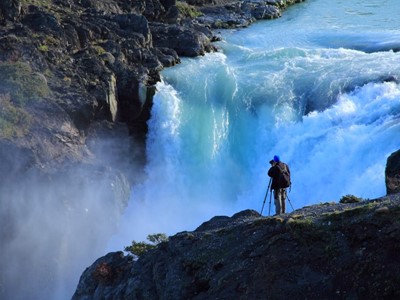 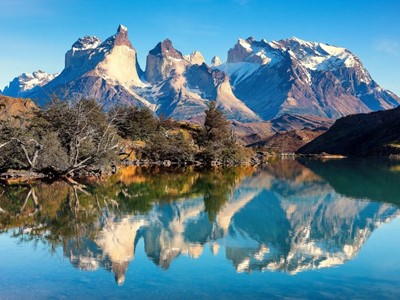 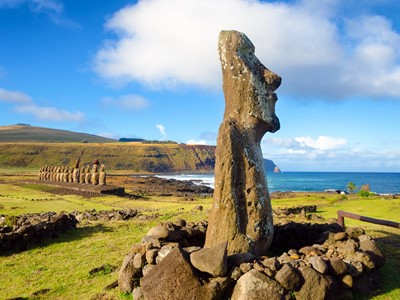 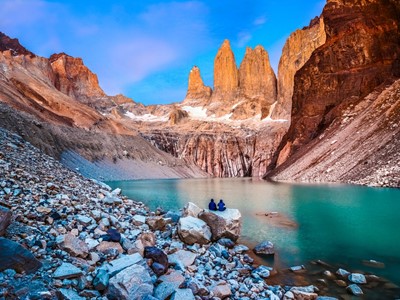 "Working with our agent at this South America travel company was easy and enjoyable."

We really liked our day tour around Easter Island! It was the spring season and so snorkeling and diving wasn't really as prevalent and so we saw all of the landmarks and volcanoes, which was incredible. Seeing where all of the Moai statues were carved from was fascinating to see.