Discover the Undiscovered in Peru

Step off of the beaten path to see the fortress of Kuelap and the beautiful Andean landscape.
6D/5N Starting at $2095 per person

This classic 6-day program to the lost kingdom of the Chachapoyas features visits the huge mountaintop temple and fortress of Kuelap, the tombs at Karajia, the Leymebamba museum with its collection of 200 mummies, the Revash tombs and the towering waterfall of Gocta.

Overnight accommodations are at the charming El Chillo Hacienda Lodge and at a local Chachapoyas hotel. All meals are included.

The pre-Columbian Chachapoyas culture, conquered in the 15th century by the Incas, has left a landscape scattered with ruined settlements and burial sites which until recently has been largely overlooked by archaeologists.

Situated in the cloud forests around the town of Chachapoyas in Peru's northern Amazonas Department, these sites are dominated by the mighty fortress-temple of Kuelap, perched majestically atop towering cliffs overlooking a verdant Andean landscape.

The Chachapoyas region has historically been somewhat isolated from the rest of Peru. Local traditions are distinctive, daily life revolves around cattle and horses, and forest-covered remnants of a glorious past can be spotted on every ridge and cliff.

Shorter 4 and 5-day itineraries can be arranged.

Day 1: Chiclayo to Chachapoyas: Across the Andes to the Amazon

Depart northward from Chiclayo across Peru's coastal plains, following the Pan-American Highway, then turn east onto the Trans-Andean route, ascending gently through regions of dry forest interspersed with irrigated farmland.

The road loops towards the lowest pass of the Peruvian Andes, at 2,135m/7,000 ft, where you cross the continental divide and enter the Upper Amazon basin. Following the valley of the Huancabamba/Chamaya river system you pass broad ribbons of bright green rice terracing, forming a striking contrast with the cactus and dense thorn-scrub vegetation of the mountainsides.

Lower downstream you pass the massive dam and intake of the Olmos irrigation project, ultimately destined to divert much of this water through a 23Km/14.2 mile long tunnel to the Pacific slope of the Andes.

You reach the bridge over the Maranon, one of the great tributaries of the Upper Amazon, which was formerly believed to be the source of that mighty river. Here you enter the Peruvian department of Amazonas, former home of a mysterious and powerful civilization, the Chachapoyas, whose remnants you will explore during this journey.

You follow the Utcubamba River, the main artery of the Chachapoyan heartland, first ascending a dramatic canyon then winding up the mountainous valley which leads you to the town of Chachapoyas. Overnight at a Chachapoyas hotel (La Xalca or similar).

*Alternately, you can fly from Lima directly to Jaen.

After breakfast, drive down to the Utcubamba River and cross over to the neighboring Province of Luya.  From the village of Lamud you continue to the village of Cruz Pata, where a short walk (45 min) takes you down to Karajía.  These striking sarcophagi, sculpted like humans, have become an icon of the area.  For 750 years they have looked towards the rising sun and undoubtedly are the resting place for some elite members of Chachapoya warriors.

Here you can look across a vertical cliff face to a completely inaccessible cave where the ancient Chachapoyans somehow installed nine tall clay figures, up to some 3 meters high, inside which the bodies of chieftains and perhaps their families were interred. One of the figures has been destroyed by falling rocks, and one damaged. The others are intact. The heads have angular, stylized faces, made of clay, while the bodies of the figures were made on site of wattle and clay, which was then covered in brightly painted designs.

On top of the heads sit skulls. The figures have been left undisturbed: yet to be studied by archaeologists and untouched by looters. How the ancient Chachapoyans reached this place to create this burial site for their elites is still a mystery.

Day 3: Journey to the Cliff Tombs of Revash and on to Leymebamba

Depart after breakfast for the 1-hour drive to Yerbabuena. Begin the steady, uphill 2-hour walk to the spectacular and colorful cliff tombs of Revash.

Throughout this journey you gaze up at huge cliffs that loom ever closer. These limestone formations, laid down in even layers over geological eons, tend to break away in neat collapses, often leaving extensive overhangs and protected ledges beneath them. In such places the ancient Chachapoya built the tombs where they buried their noble dead.

A gigantic fold in the cliffs, testifying to millennia of unimaginable tectonic forces, lies ahead of you, and at the top of the fold one such cave houses a group of tombs, ruined structures still bearing their original coat of red and white pigment. But they are far off, and this is not yet Revash.

Another hour brings you to a viewpoint much closer to the cliffs, and here you see two adjacent sets of caves, featuring cottage-sized structures covered in still-bright mineral-oxide paintwork. Some of them look like cottages, with gabled roofs, others like flat-topped apartments.

They are adorned with red-on-white figures and geometrical symbols -- a feline, llamas, circles, ovals -- and bas-relief crosses and T-shapes, which perhaps once told the rank and lineage of the tombs' occupants. They are silent, empty, their contents long ago looted, their facades still trying to tell us a story whose meaning was lost long ago.

Retracing our steps you continue by road around 45 minutes to Leymebamba, arriving mid-afternoon. This settlement was established by the Incas during their conquest of the region, and continued as a colonial town under the Spanish.

It retains much of this antique charm in its balconied houses with narrow streets where more horses than cars are parked. you go a little further up the highway and pull in to the spacious garden environment of the Leymebamba Museum, where you visit a delightful collection of extraordinary artifacts recovered from another group of cliff tombs discovered as recently as 1997 at the remote Laguna de los Condores, high in the mountains east of the town.

The exhibits, cheerfully displayed in well-lit rooms, offer a sample from the mass of artifacts recovered from this amazing discovery. In 1997 a group of undiscovered cliff tombs -- similar in style to those of Revash -- was spotted above the remote Laguna de los Condores by local farmhands.

Although they looted and damaged the site, a mass of priceless objects and a trove of vital information was rescued. You see gourds carved with animal and geometrical symbols, an array of colorful textiles, ceramics, carved wooden beakers and portrait heads, and a selection of the dozens of quipus (Inca knotted-string recording devices) recovered from the site.

A big picture window offers a view of the temperature- and humidity-controlled temporary "mausoleum" where more than two hundred salvaged mummies are kept.

Archaeologists are still uncertain as to how most of this material came to be so startlingly well-preserved, in tombs that during the rainy season were actually behind a waterfall!

But perhaps the most striking thing about the tombs is that they contain burials from all three periods of local history: the Chachapoya cultural heyday, the post-Inca invasion period, and the post-Spanish conquest. Archaeologists are continuing to study the material, seeking to learn more about the Chachapoya and their relationship with their Inca masters.

The quipu finds have been especially valuable to scholars seeking to decode the Inca record keeping system.

After our museum tour you can visit the Kenticafé across the street, for a cup of the best coffee in Chachapoyas, where you may see dozens of the region's exotic hummingbirds flitting among the strategically placed feeders, perhaps including the dazzling and highly endangered Marvellous Spatuletail.

You return to Estancia Chillo for dinner and overnight.

Depart the estancia early for the short drive to Nuevo Tingo. Take the cable-car from Nuevo Tingo to Kuelap.

Along with your expert guide you will explore this huge and mysterious site. The Incas, who finally conquered these fierce warriors, knew them by their Quechua sobriquet, Chachaphuyu - Cloud People - after the cloud-draped region where they lived.

Kuelap's existence was first reported in 1843. For years it was believed to have been a Chachapoyan fortress, and when you first catch sight of it from the fossil-encrusted limestone footpath that leads there it is hard to believe it was not.

The massive walls soar to a height of 19 m/62 ft and its few entrance passageways are narrow and tapering, ideal for defense. Yet the archaeological evidence now suggests that this was principally a religious and ceremonial site.

Chachapoyas was not a nation, or an empire, but some sort of federation of small states centered on numerous settlements scattered across their mountainous territory. The earliest settlement dates obtained here suggest that its construction began around 500 AD and, like the Moche coastal pyramids, it was built in stages as a series of platforms, one atop the other.

It is now a single enormous platform nearly 600m/2,000ft long, stretched along a soaring ridge top. Seen from below, its vast, blank walls give no hint of the complexity and extent of the buildings above.

When you reach its summit you find a maze of structures in a variety of styles and sizes, some of them faced with rhomboid friezes, some ruined and some well preserved. Here you can try to imagine the lives of the Chachapoyan elite and their servants who lived here, enjoying a breathtaking view of forested Andean mountains and valleys.

So distant and neglected was this region until recently that little archaeological research has been done at this important site, and our knowledge of it remains vague. An adjacent site named La Mallca, larger though less dramatic than Kuelap, has not been studied at all.

You will be driven back to Chachapoyas. Dinner and overnight at a Chachapoyas hotel.

Leaving early from the hotel you drive 1.5 hours to the village of Cocachimba where you start the trek to the waterfall of Gocta.  This waterfall, though known for many years by locals, was only recently measured in 2006 and found to be the third highest in the world at 2,528 feet.  The trek goes along the side of a valley through sugar cane fields and into forest that is home to the yellow-tailed woolly monkey, mountain sloth and the magnificent Andean Cock-of-the-Rock, Peru's national bird. The male of this large, brilliantly colored red-and-black member of the cotinga family sports a huge crest that completely envelops its beak. When the males gather they hop from branch to branch through the trees, insulting each other with loud squawks and screeches in an attempt to attract females..  With glimpses of the waterfall along the way you arrive at the base of the highest fall after around 3 hours. You hear the thunder of Gocta before you see the falls, a huge two-stage torrent of water falling from the towering limestone cliffs characteristic of the entire region. Those brave enough may take a dip in the pool at the base.

Dinner and overnight at a Chachapoyas hotel.

Day 6: Transfer to Jaen or Chiclayo

Private transfer to the Jaen Airport or Chiclayo. 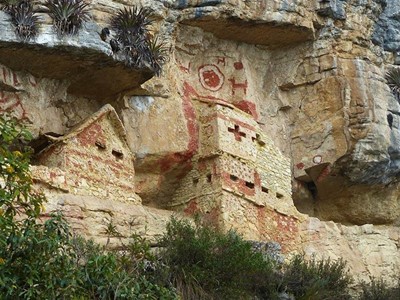