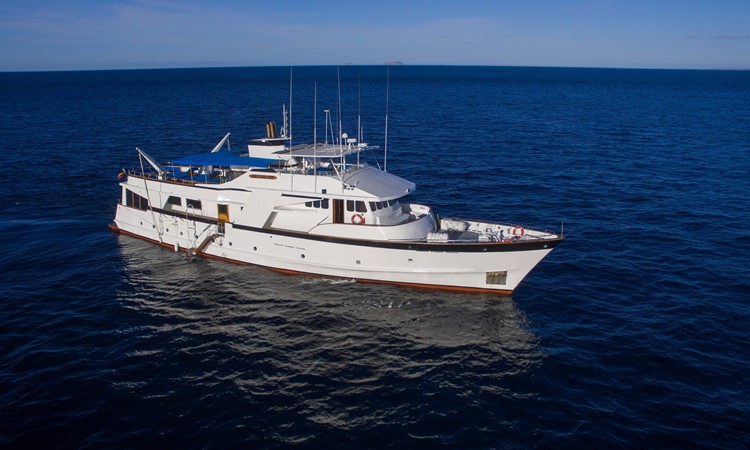 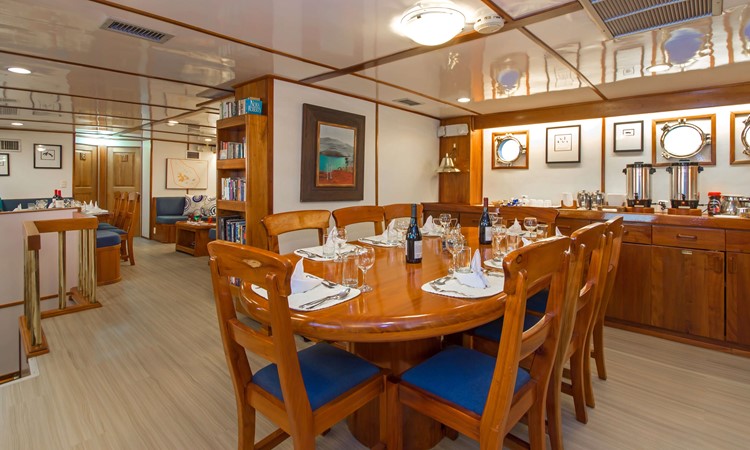 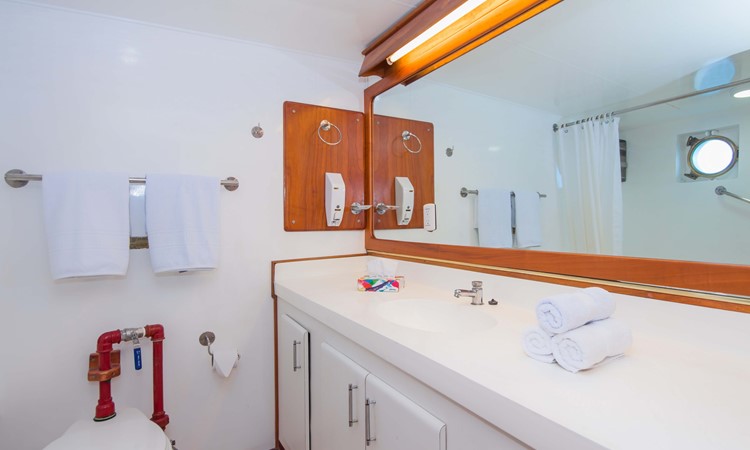 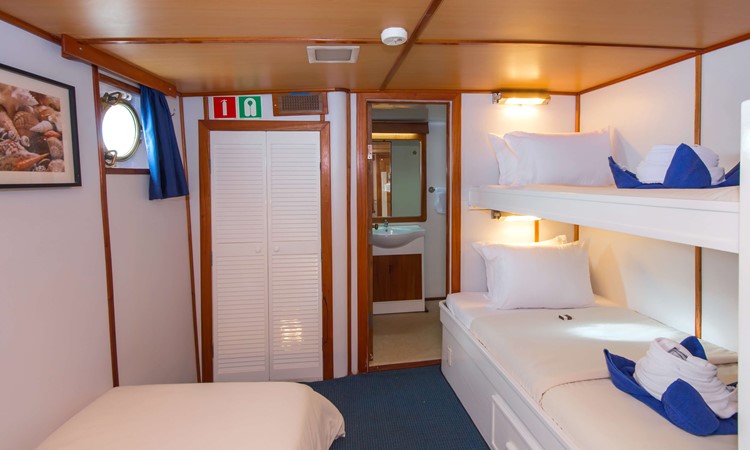 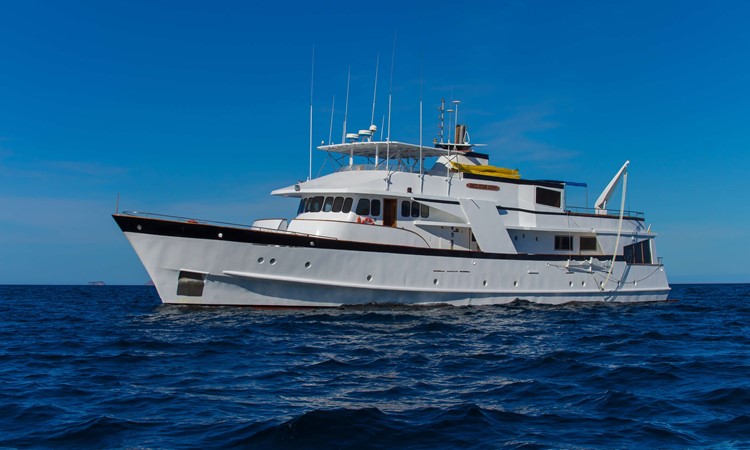 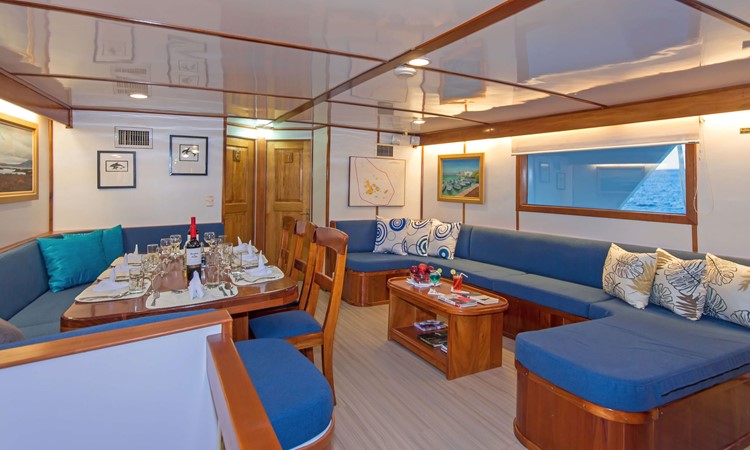 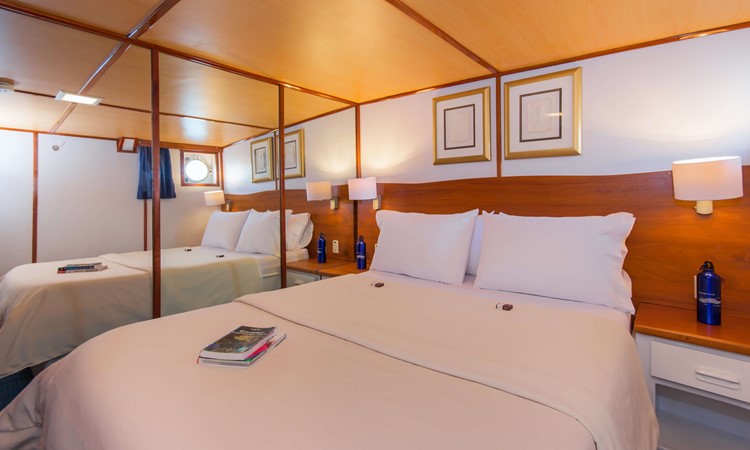 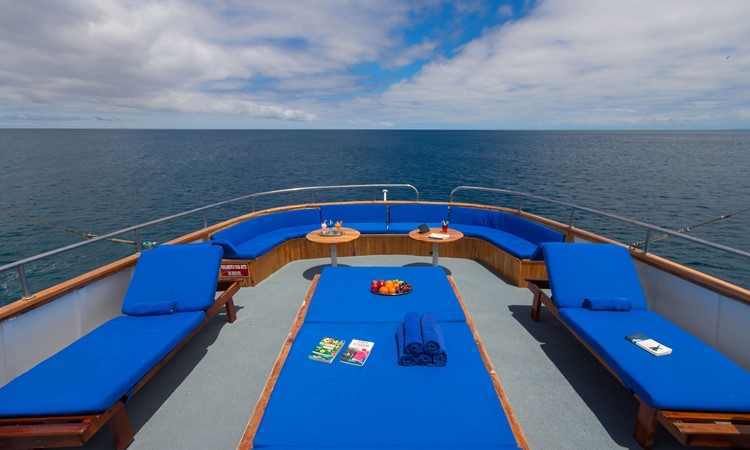 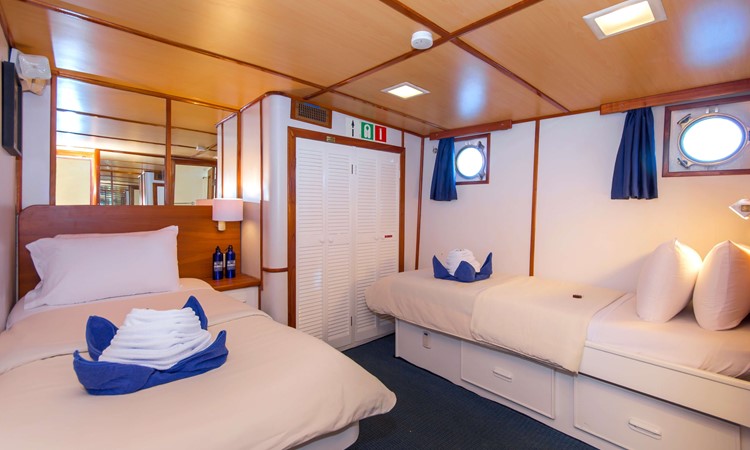 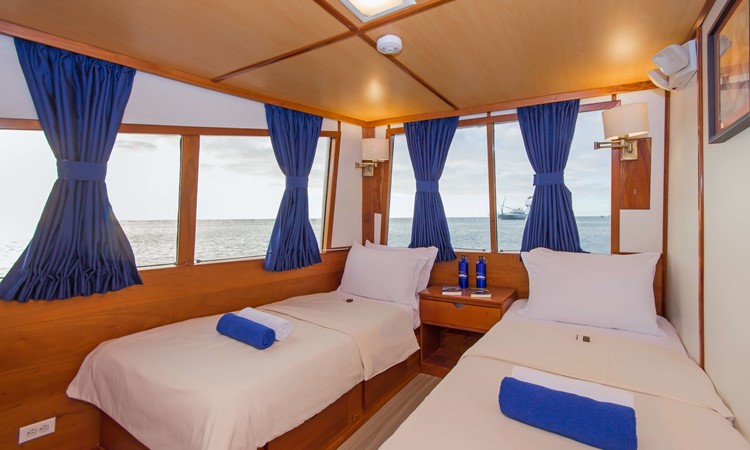 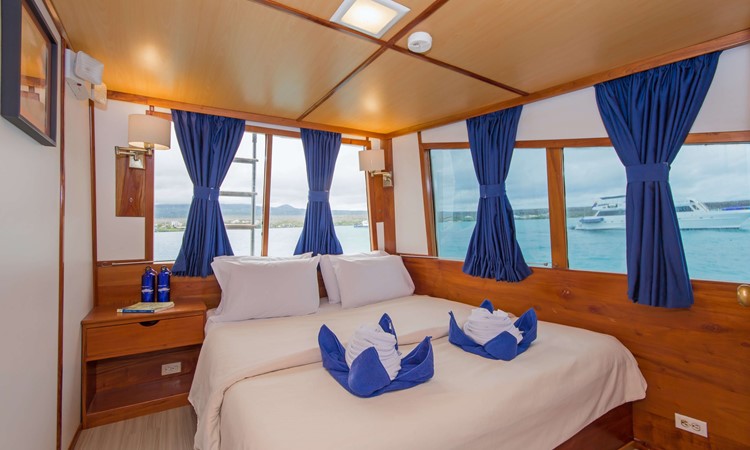 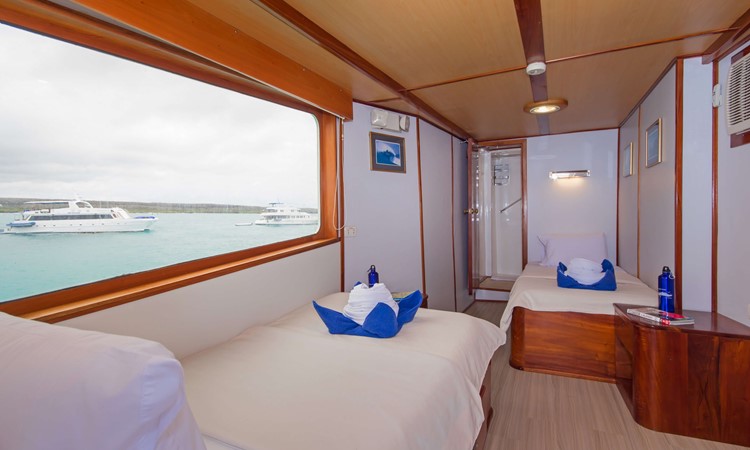 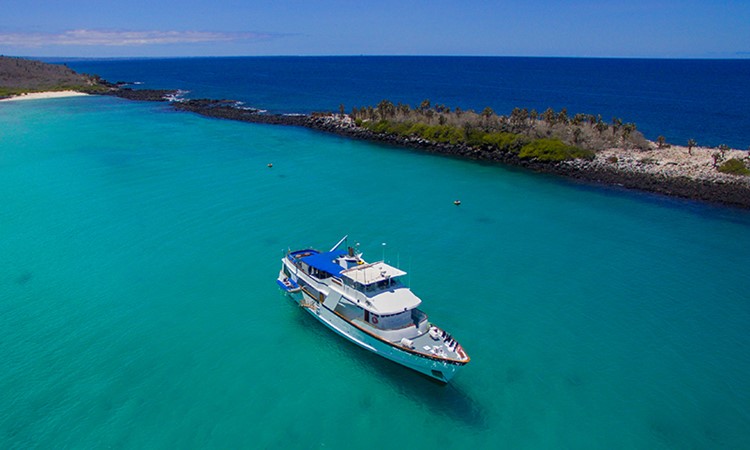 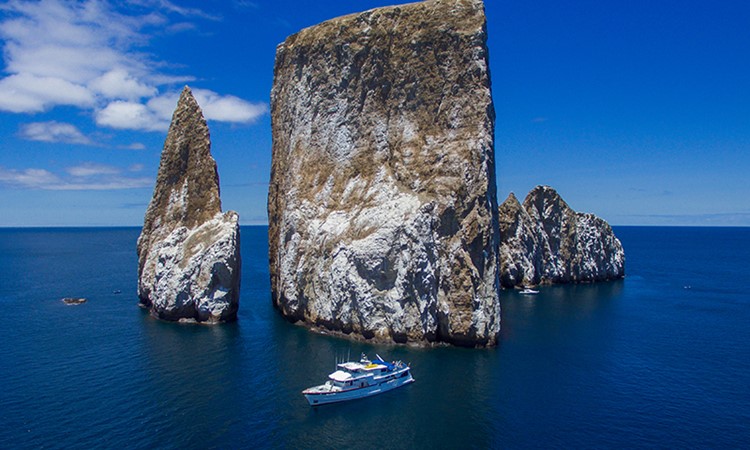 With panoramic windows in the salon and great deck space, Beluga Premium Motor Yacht is a fantastic way to cruise the Galapagos Islands in speed and style.

The Beluga is outfitted exclusively for the Galapagos Islands and has been awarded the Smart Voyager certification for adhering to conservation standards.

Equipped with the most modern safety and mechanical equipment, Beluga accommodates 16 passengers in 8 double cabins; one of these has an additional berth which becomes a triple room which is suitable for families Each cabin has their own private bathroom equipped with hot & cold water showers. Beluga is fully air-conditioned, has spacious social areas with all the comforts and facilities of a superior first class motor yacht: panoramic windows in the salon / dining area, and a large sundeck for relaxing, sightseeing or sunbathing. The Beluga’s friendly and professional crew will make sure to fulfill our every need during your journey. Beluga Galapagos cruise is also complies with all international maritime regulations and is SOLAS certified. 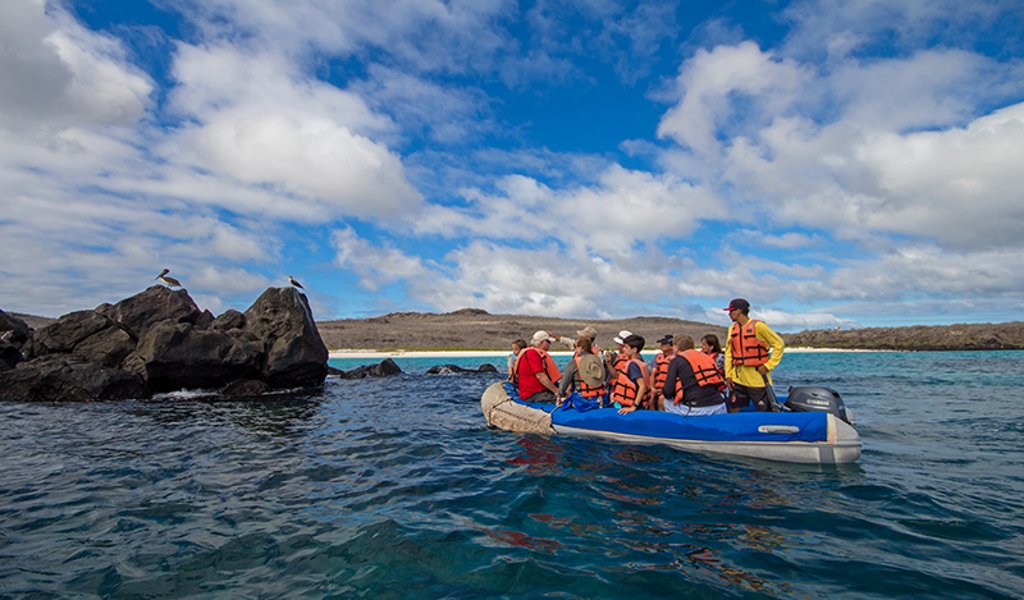 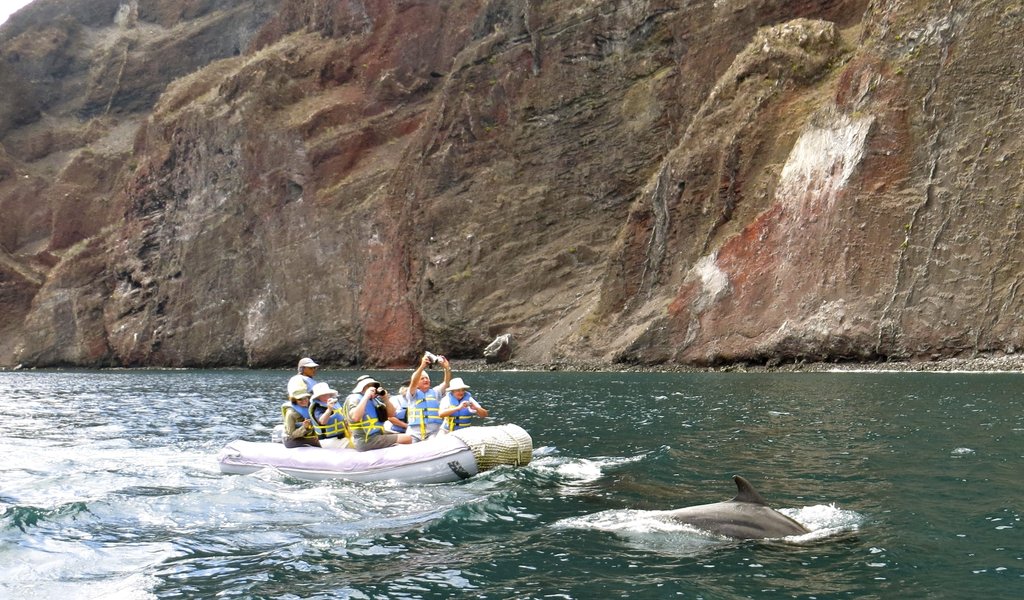 Beluga offers the options of a 4 day, 6 day and 8 day itineraries that visit selected sites which are approved by the National Park; each of these is unique, rich and varied and offers the opportunity to experience the Galapagos up close and personal with a small group led by a highly experienced naturalist guide. The itineraries can be combined to form a 15-day itinerary that we highly recommend for those travelers that would like to have a complete, in-depth experience of the Galapagos Islands.

Devil’s Crown: This is a snorkeling site located just off Punta Cormorant. The site is a completely submerged volcano that has eroded to create the appearance of a jagged crown.

Post Office Bay: This is one of the few sites visited for its human history. Visit the wooden mail barrel where letters are dropped off and picked up and remains of the Norwegian fishing village.

Isabela Island (Albemarle): Isabela is the largest of the Galapagos Islands formed by five active volcanoes fused together. Wolf Volcano is the highest point in the entire Galapagos at 1707m.

Puerto Villamil: Puerto Villamil is a charming small town on a white sand beach. Highlights include the Tortoise Breeding Station and the flamingo lagoon. Other visits (depending on conditions) are the Tintoreras or Los Humedales.

Elizabeth Bay: This spot is only accessible by dinghy. It is possible to see penguins on the small islets in the bay. The end of the bay is long and narrow surrounded by three species of mangroves. Galapagos Sea Turtles and rays can usually be seen in the water.

Urbina Bay: Urbina Bay is located at the central-west coast of Isabela Island at the foothills of Alcedo and Darwin volcanoes. Highlights include the colourful land iguanas, Galapagos Giant tortoises and the coral uplifting from 1954.

Tagus Cove: Tagus Cove is a natural harbor where centuries ago whalers and pirates left their ship’s names painted or carved on the rocks. A walk uphill to Darwin’s Crater salt-water lake will provide an excellent view.

Fernandina Island: Fernandina is the youngest volcanic island and is still active.

Punta Espinoza: Punta Espinoza is a place famous for its large colonies of marine iguanas and as the habitat of unique species like the flightless cormorant, Galapagos penguin, Galapagos hawk, Galapagos snake, among others.

Punta Vicente Roca: This site is visited by dinghy rides along the cliffs or the partially sunken cave at the water’s edge. Nasca boobies, blue-footed boobies and flightless cormorants inhabit the shoreline.

James (Santiago) Island: This Island is located between Isabela and Santa Cruz Islands. This Island offers a wide variety of seabirds, marine iguanas and fur seals.

Puerto Egas: A walk along the rocky coast line that will you show you a view of some of Galapagos’ best tide pools. Some highlights include: Sugar loaf volcano, fur seals, oystercatchers, marine iguana colony, and old salt mine

Bartolome Island: A hike will take you to the highest point on Bartolome for a spectacular view. Sea lions and penguins can be seen around Pinnacle Rock. There is a sandy beach with great swimming and snorkeling.

South Plaza Island: Plazas consists of two very small islands that were uplifted from the sea, separated by a channel. Only South Plazas has a visitor site. The highlights include tall Opuntia cactus, land and marine iguanas, rocky cliff that looks out towards open ocean which is also a nesting site for red-billed tropic birds and gulls, and a seal lion bachelor colony.

San Cristóbal Island (Chatham): San Cristóbal is the easternmost island of Galapagos and also one of the oldest.

Kicker Rock: Kicker Rock (Leon Dormido) is the remains of a lava cone eroded by the sea, the two vertical rocks rising 500 feet from the ocean form a small channel that is navigable by small boats. Many sea birds can be seen here.

Pto Baquerizo Moreno: Here you will either visit El Junco o Cerro Tijereta depending on conditions, followed by a visit to the Nature Interpretation Centre. El Junco is a freshwater lagoon at 700m, with great views and ferns, miconias, pintails and gallinules. Cerro Tijereta has a frigate bird colony.

Hood Island (Española): Hood is the oldest of the Southern Islands and is the southernmost in the archipelago. Because of its remote location a unique range of endemic species evolved here.

Gardner Bay: Located on the northeast of the island, the site has a long and beautiful white sand beach inhabited by sea lion colonies.

Islote Garnder and Islote Osborn: These islets are snorkeling sites where visitors will see an abundance of tropical fish, reef sharks, and turtles.

Punta Suarez: The wildlife at Punta Suarez is plentiful and varied. Along the cliff visitors can enjoy the blowhole where seawater is forced about 20m into the air. The highlights are the Waved albatross (April-Dec) that are only found on Hood, Galapagos Hawks, blue-footed boobies, Ñasca boobies, and Española lava lizards.

Santa Cruz Island (Indefatigable): Santa Cruz is the second largest island and the most populated of all islands.

Tower Island (Genovesa): Tower is an eroded flat volcanic island, with a natural harbor, which is actually the submerged caldera of this volcanic island.

El Barranco: There is a good possibility of seeing the unique “Short eared owl” at this site. During the dinghy rides along the cliffs fur seals and several species of seabirds can be spotted.

Caleta Tortuga (Turtle Cove): Turtle Cove is a red mangrove lagoon on Santa Cruz and a perfect example of how mangroves alter the marine environment to create a rich and unique habitat.

The Beluga is a fully air-conditioned, spacious and comfortable motor yacht. The salon is equipped with flat screen TV and DVD systems.

The Beluga has 8 Double cabins each with private bath. Hot / cold water showers. Security safe in each cabin. 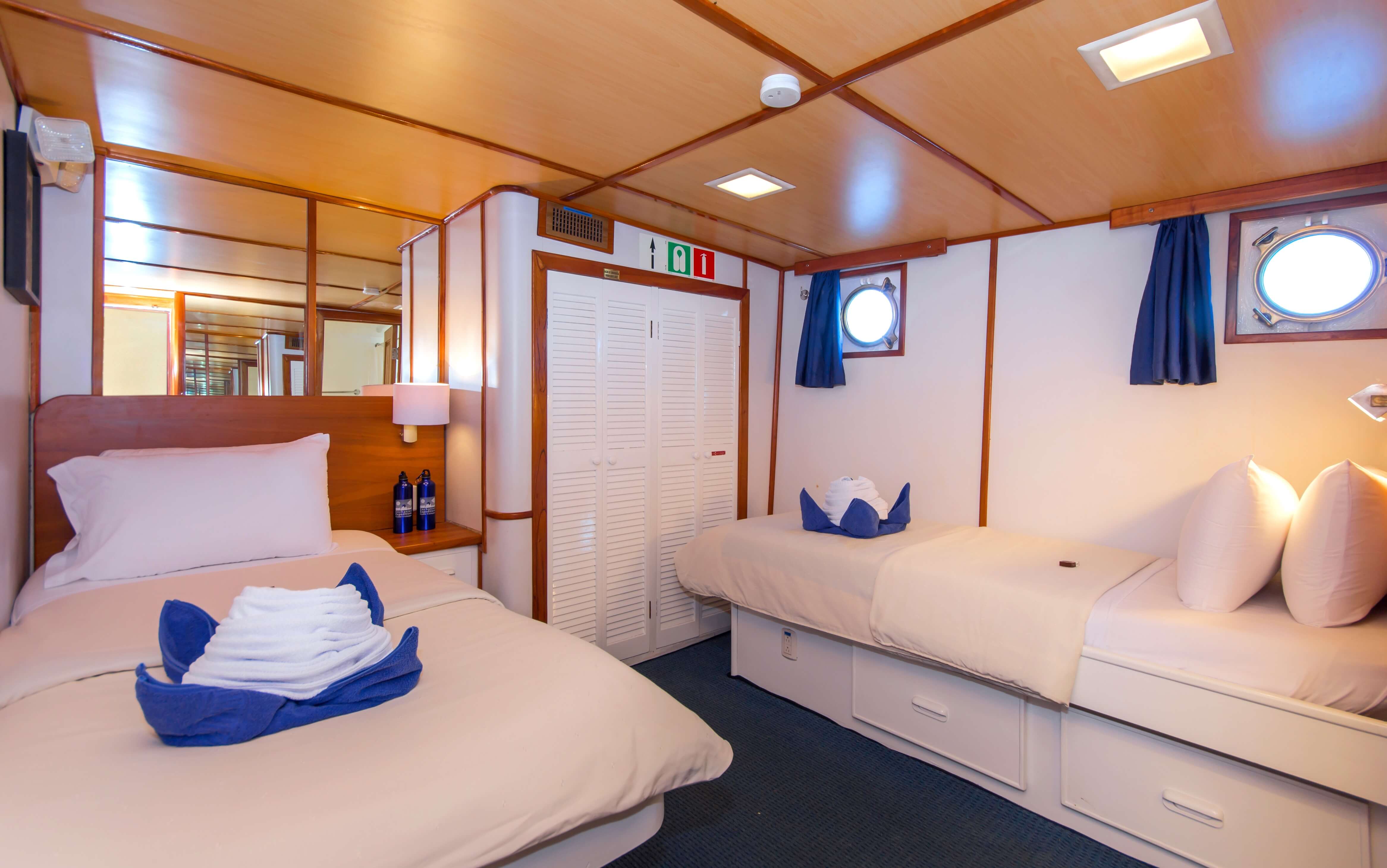 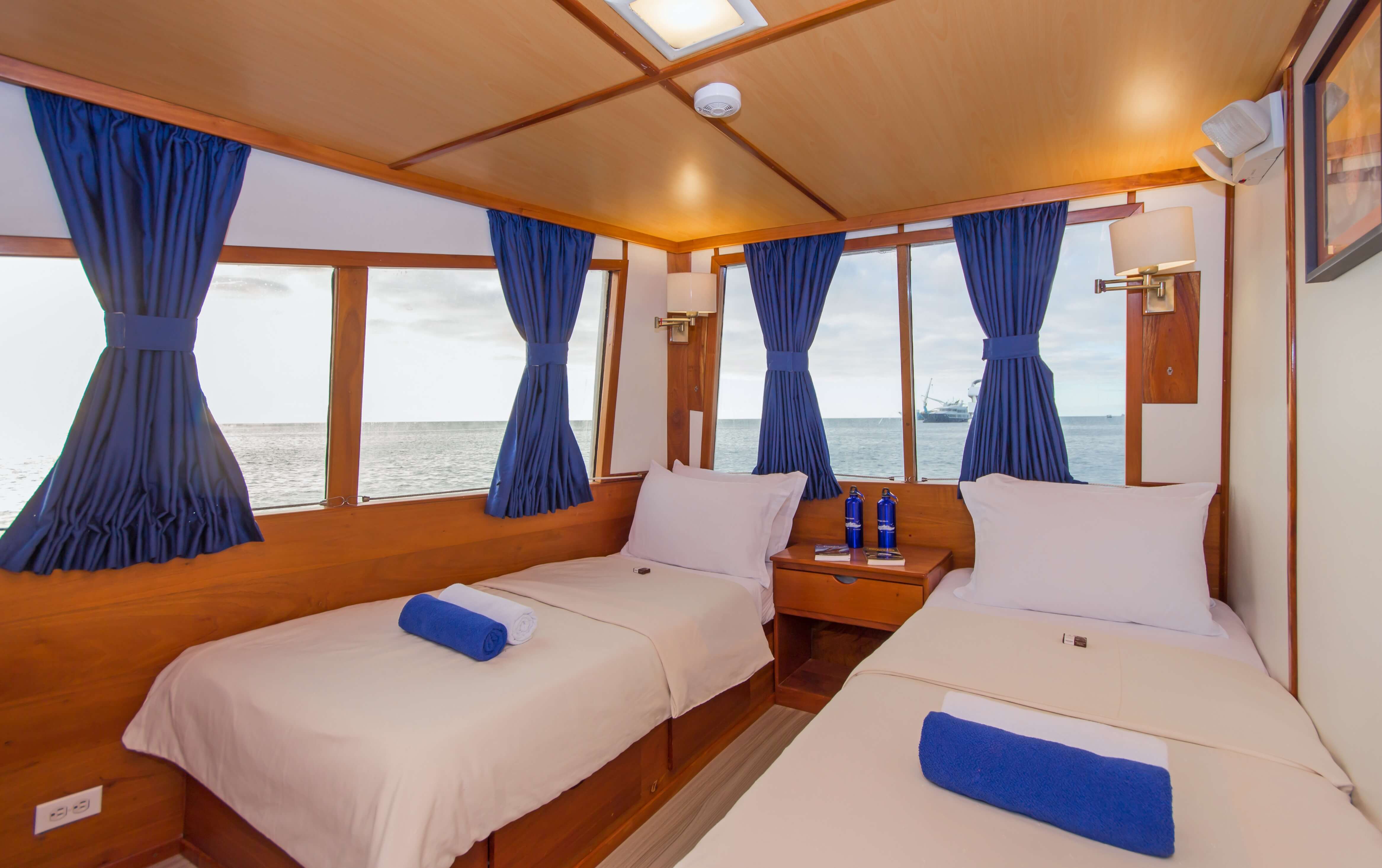 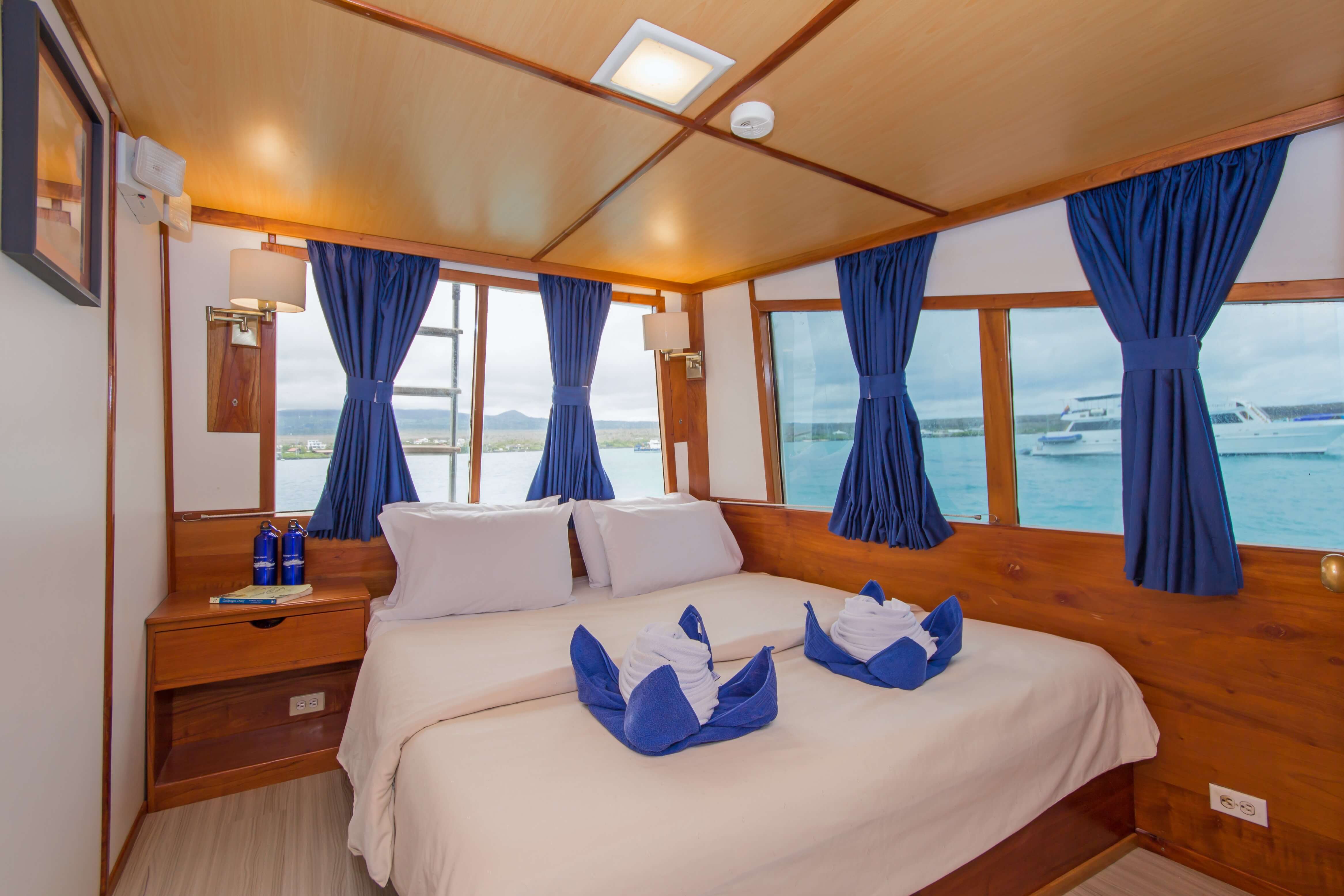 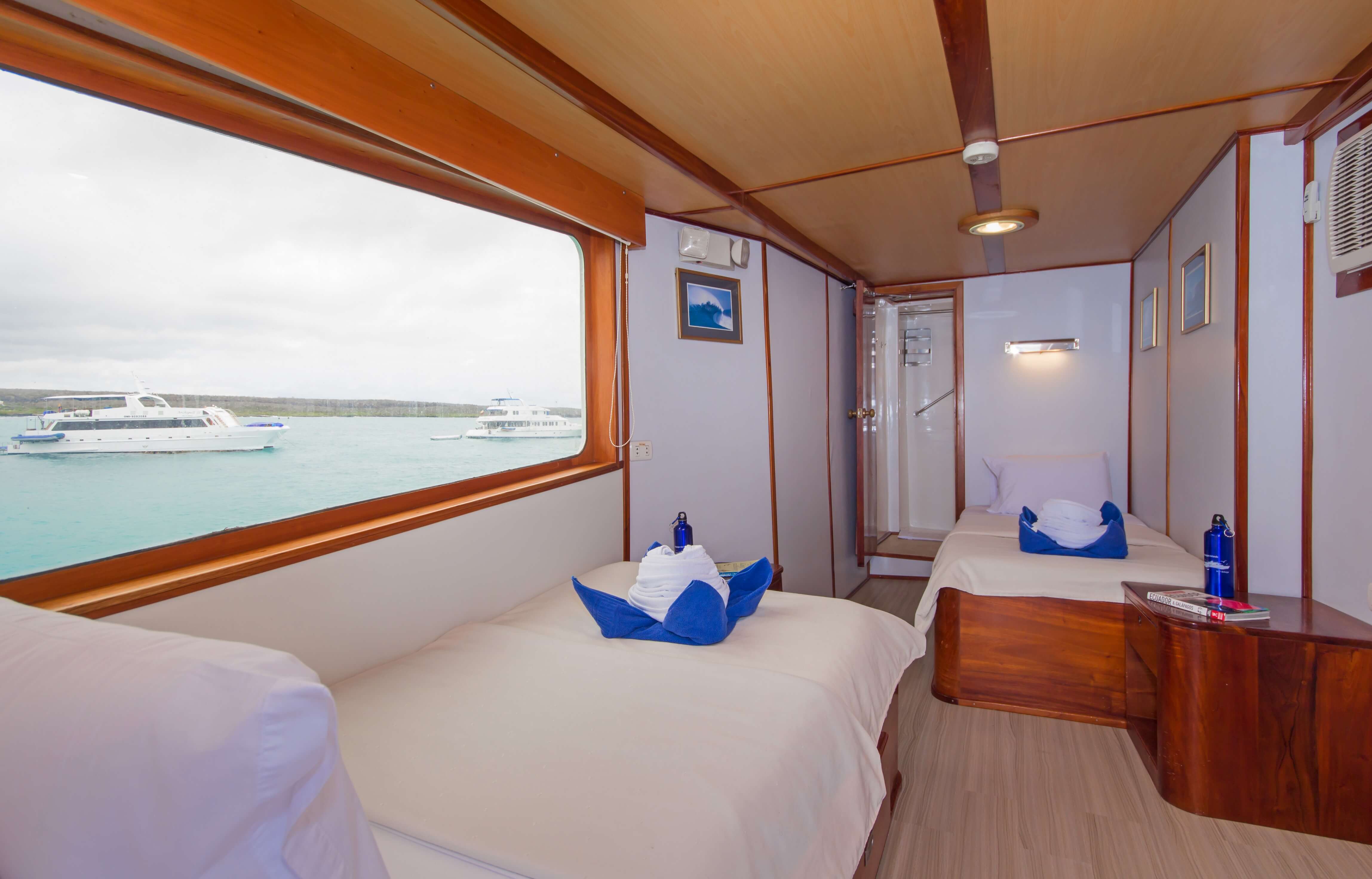 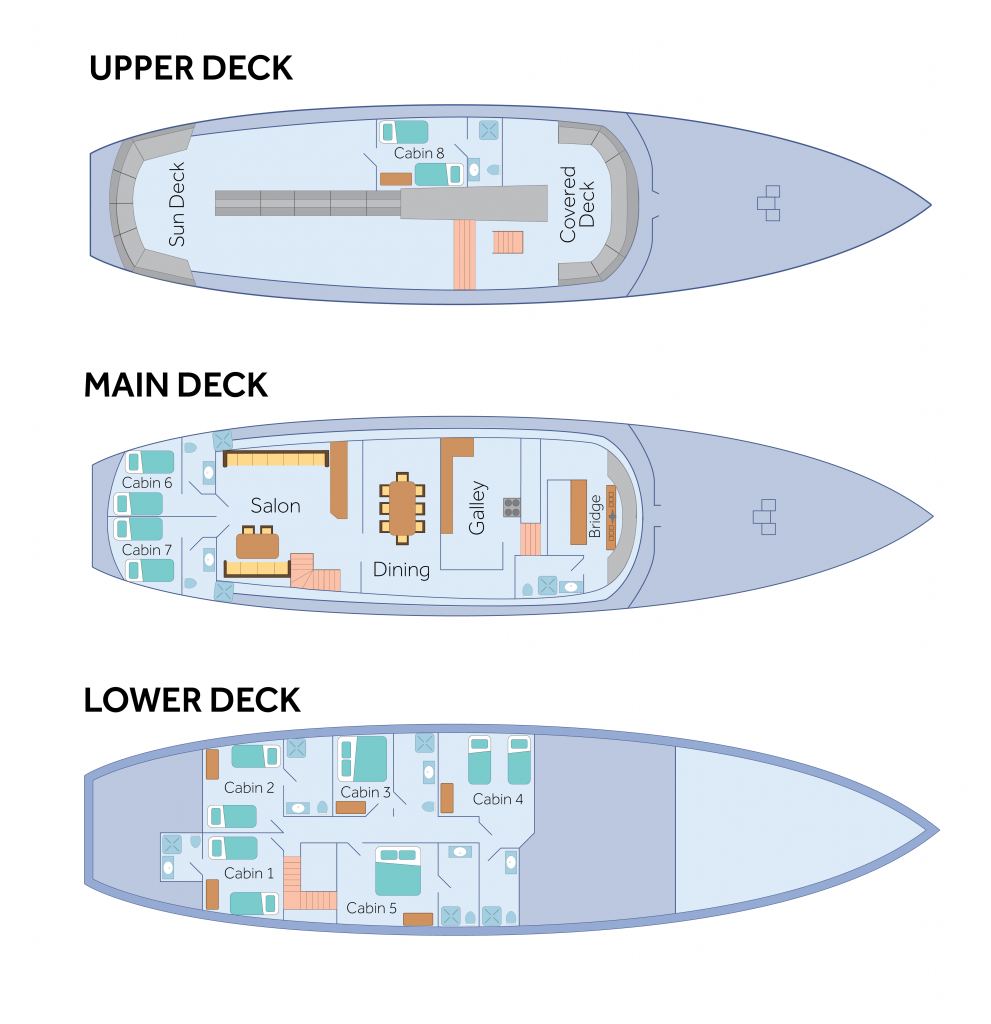