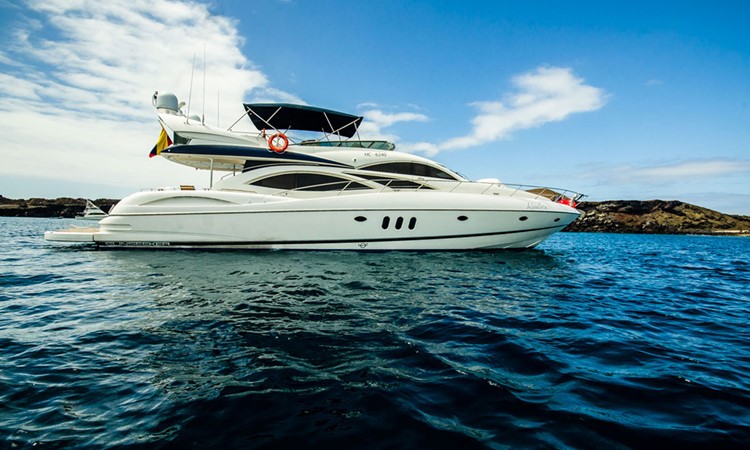 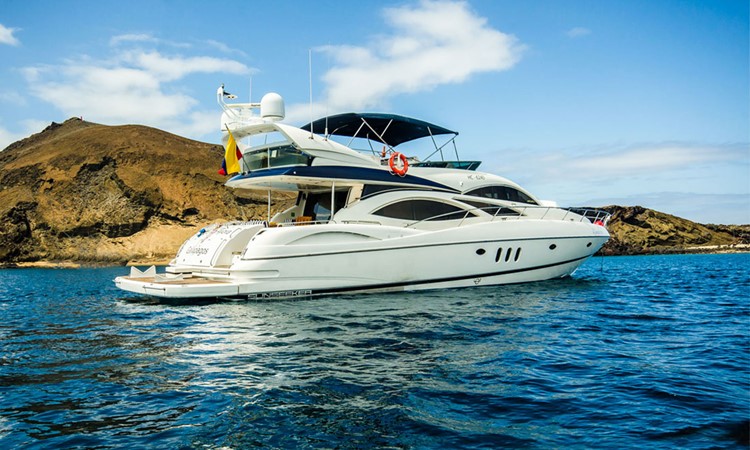 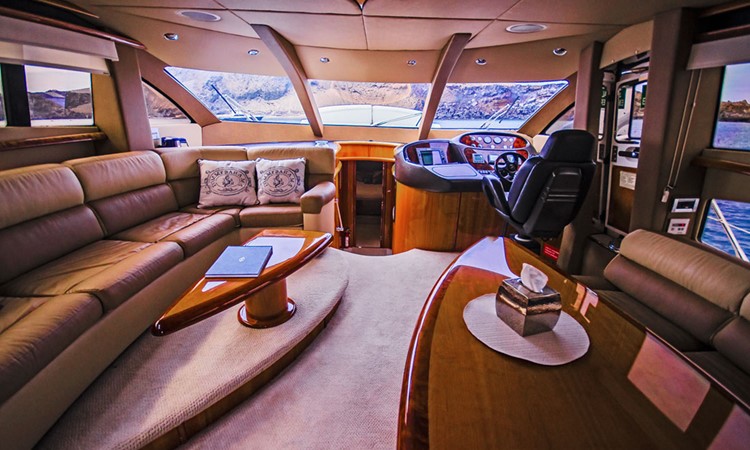 Windrose is the newest yacht for Galapagos travel, a state-of-the-art Sunseeker Manhattan 74-foot motor yacht. She cruises at unprecedented speed, in wonderful comfort, with catering facilities on board for snacks and lunch, space for everyone to relax, a passionate naturalist guide and dedicated crew.

The Windrose is the yacht used by the Galapagos Habitat Hotel for day cruise to outlying islands. The efficient design and high speed allows you to reach islands much quicker thereby allowing more time to explore and enjoy your time. It also allows visits to two islands in one day possible.

ISLAND YACHT TOURS:
SEYMOUR NORTE + PLAYA BACHAS (Mondays/Fridays)
After breakfast, you will be picked up and transferred to the Itabaca Channel to board the yacht that will take you to North Seymour Island, a great place for hiking. There is a visitor or circular path about 2 miles long that crosses the interior of the island and allows you to explore the rocky coast path. Along this trail, you will be able to discover some of the largest seabird colonies on the Galapagos Islands.

After onboard the yacht, we head to Bachas Beach, a beautiful white coralline expanse. This is the perfect place for practicing snorkeling, swimming or to simply enjoy the white soft sand. Several brackish lagoons only a few steps away from the sea provide feeding grounds for various wading birds, from stilts to flamingos.

BARTOLOME + SULLIVAN BAY (Tuesdays/Saturdays)
After breakfast, you will be picked up and transferred to the Itabaca Channel and board the yacht for the 2-hour navigation to Bartolome, an island with turquoise waters and beautiful white sand beaches. Upon arrival, begin climbing a staircase. From the top you will see a spectacular landscape with two beautiful bays and fascinating formations of lava and volcanic cones. Here is the famous Pinnacle, which is a huge black lava formation that has eroded over time, representing the most recognized image of the archipelago. Near Pinnacle Rock you will also see two beautiful beaches in the form of a crescent.

This island offers some of the most beautiful landscapes of the archipelago. It is an extinct volcano and has a variety of red soils, orange, green, black and shiny volcanic formations. This is the perfect place to observe the Galapagos penguins. Moreover, you can snorkel with sea turtles, sharks, white tip reef, tropical fish, sea lions and many other unique marine species. Take also into account that Bartolome Island is the breeding ground of the green sea tortoises. They come to the shores of the island to nest during the months of January and March, every year.

After lunch onboard, you will visit Sullivan Bay, located on the eastern coast of Santiago Island. Sullivan Bay is the most interesting lava field in the Galapagos. A short walk on lava is a unique chance to experience the volcanic origins of the islands. “Pahoe hoe” and “AA” lava are the predominant shape in this moon scape. After a land visit we have time to snorkel and enjoy the amazing white sand beach, where it’s easy to observe many different species of fishes, some turtles, sea lions and hopefully Galapagos Penguins.

SANTA FE ISLAND + SOUTH PLAZA (Wednesdays/Thursdays)
Two fantastic islands for wildlife and wild encounters await! After breakfast, you will be picked up and transferred to the Itabaca Channel to board the yacht for the navigation to Plazas Island.

We begin our day with a dry landing on South Plaza Island. This beautiful island is full of both land life and birds, including Swallow-tailed Gulls, Lava Gulls, Frigate birds, Masked boobies, Blue-footed boobies, Pelicans and Red-billed Tropicbirds. It’s easy to wander past a gull’s nest and observe chicks flapping their wings trying to fly.

Created by lava that was uplifted from the sea bed, South Plaza has resident wildlife and diverse plant life that has progressively taken over the island since it was formed. Along its steep cliffs, we find an amazing variety of birds, while on the lower rocky beach, we can observe colonies of sea lions and marine animals.

After a delicious lunch on board we head to Santa Fe Island, also called Barrington Island after British Admiral Samuel Barrington. This small island is formed of uplifted, submarine basaltic lava, formed some 4 million years ago. Much of it is a faulted plateau covered with a forest of giant Opuntia cactae.

As you walk through the dense bushes on the short trail, watch out for the Croton bushes, an endemic plant with an indelible stain. The most spectacular plants are the giant prickly pear cactae, unique to Santa Fe (Opuntia echios barringtonensis). The Galapagos dove is common on the trail, as are painted locusts, often pursued by a snake or two. The park monument is often a vantage point to spy a Galapagos hawk. The highlight is the land iguana, a lighter-colored iguana that is endemic to Santa Fe. Santa Fe is also home to a large Sea Lion nursery.
*On Thursdays, the order will reverse - starting with Santa Fe Island then South Plaza after lunch.

SANTA CRUZ ISLAND: CHINESE HAT + DRAGON HILL (Sundays)
After breakfast, you will be picked up and transferred to the Itabaca Channel to board the yacht for a 2-hour navigation to Chinese Hat, a very small volcano close to Santiago Island, surrounded by small spatter cones. It's one of the smallest Galapagos Islands but don't be fooled: it has a unique visitor site with an unforgettable view!

It's one of the smallest Galapagos Islands but don't be fooled: it has a unique visitor site with an unforgettable view! Galapagos Penguins and Galapagos hawks are active here. A wet landing on the main beach of the island gives us time to enjoy the sandy beach, where sea lions rest and a variety of wading birds feed on the shore line. The tranquil waters make great snorkeling experiences, where we can observe several tropical fish, sea stars and the chance to spot penguins under water.

After lunch on board, we motor over to Dragon Hill, one of the few visitor sites directly related to a conservation program led by the Charles Darwin Foundation and the Galapagos National Park. It was named after the land iguanas, considered the Galápagos’ “dragons”. The population of land iguanas in this area was brought back from near-extinction by the efforts of the Galápagos National Park. It took a lot of work for them to control the populations of feral mammals such as dogs, cats, goats and donkeys brought by early Galápagos settlers. Heading inland on the trail, we pass two small salt-water lagoons where it is sometimes possible to spot flamingos and other shore birds. The trail continues on and circles round the hill, providing a memorable Galapagos view.